Will there be more surprise additions to the line up?

ITV has announced the smallest line up of famous faces in the history of the show for the upcoming series of I’m A Celebrity – so could there be room for just one more to join in?

Quite possibly, especially after light entertainment legend Noel Edmonds’ involvement was unveiled after the majority of the jungle contestants.

The rumour mill of additional celebs willing to don a corked hat Down Under will no doubt continue to turn long after the likes of Harry Redknapp, Anne Hegerty and Rita Simons have all had their first revolting meal around the campfire.

Indeed, anyone with any kind of public profile mooching around in Oz in the near future could be in running to appear on the show.

After all, if Malique Thompson-Dwyer qualifies, who doesn’t?

Corrie actor James Burrows – recognisable to millions of soap fans – was linked with a spot just days before the campmates’ names were released, mostly because he was in the southern hemisphere.

Loving life down under with this one @sophie_coates and bump x❤️

As it turned out, the reason for the surfing fan’s Aussie visit is he is on holiday with pregnant girlfriend Sophie Coates.

But another telly personality has today put themselves in the frame for I’m A Celeb speculation from fans after they too revealed their whereabouts on the other side of the world on their social media accounts.

Megan McKenna, best known for her time on The Only Way is Essex, Ex on the Beach and Celebrity Big Brother, has dropping some fairly big hints about her current location without explicitly saying where she is or why she’s there on Instagram over the past 24 hours.

The reality TV performer shared an Instagram Story picture of her dog with her 2.1 million followers  as she said goodbye to him yesterday.

“Leaving my little bear this morning,” she captioned the snap, hinting at a journey. 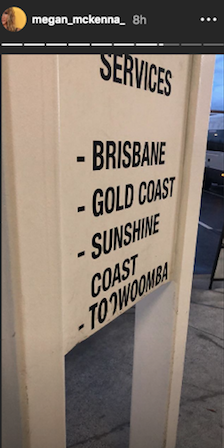 Since then she has uploaded a pic of her sitting in a first class plane seat, posted a short video of a cityscape as an aircraft descends and an image of a road sign detailing several Australian locations.

But what can it all mean?

And would you like to see her join the I’m A Celebrity camp?