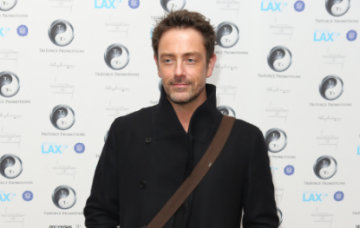 He's written and directed a film to raise greater awareness

Male mental health is very much a talking point at the moment thanks to Coronation Street’s tragic storyline centred around Aidan Connor’s suicide. And along with This Morning’s #Project84 people are really starting to talk about the alarming rates of male suicide in the UK.

Former Emmerdale actor Dominic Power who played killer Cameron Murray for three years on the ITV soap wants to keep the momentum going and has written and directed a film, Blinds, about mental health – which includes the subject of male suicide.

We sat down with him to talk about the project and why it’s so important to keep the conversation going.

So what made you want to make this film?

I came back to do some teaching at The Miskin Theatre which is where I trained as a young actor and what struck me were the poster in the gents’ toilets offering support or someone to talk to if needed. These sorts of posters weren’t around when I was there – or even five years ago. So what’s changed? Our outlook? Our youth’s mental health? Both?

And then you’ve got social media and I’ve had to watch my kids grow up and have to deal with that fear of missing out thing. When I was at school and I was grounded it was the worst thing in the world. That whole weekend was mental anguish. And now for teenagers they’re seeing it and it probably looks better than it is. That’s worse than the imagination.

And with the male suicide thing, I was really inspired to hear that in the heart of London male barbers were being trained up as counsellors because people open up to their barbers and they were on the look out for – if people hadn’t turned up, hadn’t seen them for while.

There was also an episode of This American Life which I’m a massive fan of and there was this radio station, Bob Fass was the DJ, and one day someone just called up and said: “I’m committing suicide” and it was a really interesting dialogue. And as I was listening to it I thought it would make a brilliant script. So that’s what I did, I updated it in places to make it less stuck in the 70s. So Part Four is that.

Parts One, Two and Three are people who are surrounded by friends, family work colleagues who don’t know and in part four you have a stranger on the other end of a phone across the country who can help and you’re thinking this is the wrong way round, surely?

Why is it so important that we all keep talking about mental health?

I’m hoping young and old get to see the film and really reflect on this growing phenomenon of mental health issues we are all effected by in one way or another.

And in turn being present for someone, knowing what to say, knowing how to listen, how to offer guidance could save a life.

Have you had your own mental health struggles?

Towards the end of my time on Emmerdale I was aware that I was probably burning the candle at both ends. I was filming heavily and I was literally dying from not having a pancreas that worked. Which is why I lost so much weight. I remember Gary Lucy saying to me: “I saw you on that and I just thought you were caning it.” The wheels were just falling off.

I lost my voice about three months before I left and there’s a whole episode – they couldn’t stop shooting – and I literally had to ADR the whole episode. So my whole immune system was just shutting down. It was a terrifying, terrifying time for me. I was essentially suffering from nervous exhaustion and then got the diagnosis (Dominic has Type 1 Diabetes) I actually had a panic attack. When I was diagnosed the doctor said: “Oh you’ll be fine as long as you don’t do anything stupid like work 13-hour days. Which is exactly what I did. I’d be working 7-7 and at about 3 o’clock I’d hit a wall.

And then I stopped sleeping. For about a month. And if you lose that REM sleep you don’t have rational thought, you can’t think straight and eventually I collapsed on set and was taken to hospital in an ambulance. I then had to take a couple of weeks off. They had Pinewood all booked so there was still a lot of pressure on me and over those two weeks I still didn’t sleep and I spent those two weeks panicking about going back to work.

By that point I didn’t even know if I could learn lines – the wheels had completely fallen off. But Kate (Oates who was Emmerdale’s Executive Producer at the time) and Lucy (Pargeter) and Charley (Webb) were all great and supportive and somehow I managed to get through. I think what lent to my manic performance was probably the fact that I was going slightly insane. And I was.

I remember Pauline Quirk (who played Hazel Rhodes in the ITV soap) being asked if she ever took the character home and she said: “No, no I’m an actor.” But I was dressed as Cameron more than I was dressed as me. I was dressed as me about 45 minutes of the day. The rest of the time I had a gun in my hand and a hood up. And I remember being on the balcony in my flat in Leeds, reading lines and I saw these builders in hi-vis jackets and I suddenly got a pang of anxiety. And I couldn’t work out why, but the storyline was them renovating for a golf course (where Cameron had buried Alex Moss’ body) for Declan and I thought ‘I need a holiday.’

What are you hoping the film will achieve?

That we could all do with being more present and compassionate to those around us. The first three films you see the main characters each surrounded by friends, family or colleges. Yet no one has a clue what they’re going through. Yet in the 4th and final short film a suicidal caller phones a radio station and is ultimately saved by the dj. A stranger. What’s with that?

I also want these young talented students to show off their incredible heart felt work. It’s very naturalistic. Think ken loach. These young adults are the ones growing up in a vastly different world to the one I or my parents did.

My number one love has always been instilling a passion into young people. And allowing them to find something they can pour there heart into sets them on a course for life where an understanding of actions, decision, being in line with ones values will keep them in very good stead.

Blinds premieres at the BFI Southbank on June 6th. For more information go to www.miskintheatre.co.uk