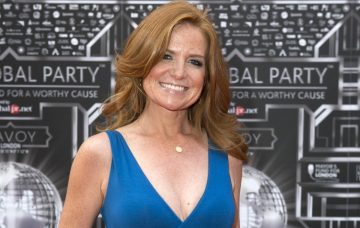 What a stunning family!

Patsy Palmer has delighted her fans by sharing a couple of photos of her kids.

The former EastEnders actress took to Instagram recently to post individual snaps of her daughter Emilia, 17, and seven-year-old son Bertie.

The first snap shows model Emilia posing for the camera in a funky patterned shirt and a pair of sunglasses.

Patsy, who played Bianca Jackson in the soap, captioned the pic: “Just ur average girl livin her best life (sic). My girl rocks.”

Fans couldn’t get enough of the shot with many saying Emilia is the spitting image of Patsy.

Shortly after, Patsy shared a snap of little Bertie showing off his pottery work.

The pic sees Bertie proudly holding up a glass bottle which he had decorated himself using the Coca Cola logo.

One fan commented on the post: “Clever boy Bertie!!!” while another said: “Well done – I thought it was a real bottle with a new design.”

The actress has Emilia and Bertie with her husband Richard Merkell. The couple are also parents to sons Charley, 26, and Fenton, 18.

In the photo, Emilia is seen resting her head on Fenton’s shoulder as he held Bertie.

The family swapped London for a life by the beach in Malibu in 2014 after Patsy quit her role as Bianca in EastEnders.

Patsy hasn’t been acting in L.A. but has instead founded the Commonwealth Lifestyle Foundation and acts as its president. It aims to empower women by bringing them together at special breakfast meetings.

She also performs as a DJ.

While Patsy isn’t as well-known in the States as the UK, her children are rising in the showbiz world.

Her eldest son has followed in her footsteps to become an actor, and has so far had parts in films Dunkirk, Legend and Darkest Hour.

Meanwhile Fenton is also a model and he and Emilia are both signed up with The Dragonfly Agency.

What a talented family!

Did you enjoy watching Patsy in EastEnders? Leave us a comment on our Facebook page @EntertainmentDailyFix and let us know what you think!