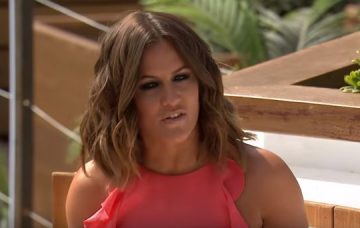 Everything you need to know about Love Island 2018

It's time for a new gang of islanders to crack on!

Love Island returned for its fourth series at the start of June, smashing ratings records for ITV2 by pulling in 4.1 million viewers in total. Wow!

So far we’ve had the usual mix of hook ups, arguments, dumpings and new arrivals, and we’re only two weeks in!

So, brush up on your Love Island vocab, cancel all summer plans, and get on that group chat as we watch another gang of islanders crack on! Only a total melt would miss it!

What is Love Island?

Love Island is, quite simply, the best and most addictive TV show you’ll watch all summer! It’s essentially a rather ludicrous, tongue-in cheek dating show featuring insanely attractive singletons who live together in a luxury villa in bikinis and swimming trunks. The whole point of the show is for all the girls and guys to find love – and there’s a £50,000 cash prize for the winning couple.

The show started life back in 2005 as a celebrity dating experiment, coupling up famous faces like Calum Best, Bianca Gascoigne and Paul Danan. But it was cancelled after just two series. Love Island was revived by ITV in 2015 and has been a smash hit success, with last year’s third series pulling in 2.5 million viewers on average.

How does Love Island work?

A group of strangers enters the villa on day one and all have to ‘couple up’ with each other. But they have the chance to de-couple and switch partners as the series continues and more people come into the villa. Anyone who is pied and left single at the end of a coupling up ceremony is sent home. There are also various challenges and games along the way, along with the usual mix of grafting, mugging off, bitching and drama.

Caroline Flack has returned to host the fourth series of Love Island, while Scottish comedian Iain Stirling is back as the popular (and sarcastic) narrator. No doubt Caroline will be feeling particularly keen for couples to find true love after just announcing her own engagement to Celebrity Big Brother housemate Andrew Brady. (It also means there won’t be any rumours of flirtations off-camera #MuggyMike we’re looking at you!)

Where is Love Island filmed?

Love Island is filmed in Majorca, at a luxury villa located just outside Sant Llorenç des Cardassar. It features a huge bedroom, outdoor kitchen, swimming pool, (of course!), hot tub, several breakaway seating areas, a roof-top balcony ideal for spying on the garden, and a hideaway. There was also an outdoor gym, fire pit and Beach Hut for islanders to chat to the camera in private.

Who are the islanders for Love Island 2018?

Among them was EastEnders actor Danny Dyer’s daughter Dani, 21, who previously appeared on another ITV2 reality show, Survival of the Fittest. The other female islanders at the start of the series were: Hayley Hughes, 21, Laura Anderson, 29, Samira Mighty, 22, and Kendall Rae-Knight, 26.

Student and construction worker Niall Aslam left the villa on day nine for “personal reasons”. No further details about his exit have been revealed.

Who has been dumped from Love Island 2018?

The first islander to be dumped this series was Kendall Rae-Knight after her partner, Adam Collard, chose to couple up with Rosie Williams instead of her.

Hayley Hughes and Charlie Frederick were the first couple to be dumped after losing the second public vote to Dr Alex George and Samira Mighty. Both couples had been voted the “least compatible” in the villa by their fellow islanders, forcing them to face the public vote.

Who are the current couples on Love Island?

First coupling of the series

Kendall Rae-Knight and Niall Aslam. (Adam Collard then arrived in a twist and stole Kendall away leaving Niall single.)

Are there any changes for Love Island 2018?

The biggest change is eliminating the smoking area from inside the villa.

In previous years we’ve watched the islanders gather around in the smoking area to gossip, but this year they are only allowed to smoke off-camera in a specially designated area outside the villa.

When does Love Island 2018 start and how long does it air for?

Love Island’s fourth series started on Monday June 4, 2018. The show traditionally airs every night of the week at 9pm on ITV2, apart from Saturdays. According to Radio Times, this year’s show will be the longest ever, running at eight weeks!

It’s expected the prize will once again be £50,000 for the winning couple – although whether they choose to share or steal remains to be seen! And, of course, the money doesn’t just stop at the villa. Former islanders can expect to earn big bucks through personal appearances, sponsored social media posts, fashion lines and other TV appearances.

Aspiring musical theatre wannabe Amber Davies and hairdresser Kem Cetinay bagged the top prize in 2017, choosing to split the £50,000 prize money. Sadly, their romance also split, with the couple calling time on the relationship. Of last year’s couples, only two are actually still together – Camilla Thurlow and Jamie Jewitt, and Dom Lever and Jessica Shears.

Have any of the Love Island relationships lasted?

Yes! Not many, but some have – and in a big way! Olivia and Alex from series two are getting married later this year, making them the first Love Island couple to wed. Nathan Massey and Cara de la Hoyde, who won series two, are still together (after a brief split) and have a baby son, Freddie, born in December 2017. That wasn’t the first Love Island baby, though – Cally Jane Beech and Luis Morrison from series one have daughter Vienna, born in May 2017.

Excited about the new series of Love Island?  Leave us a comment on our Facebook page @EntertainmentDailyFix and let us know what you think!