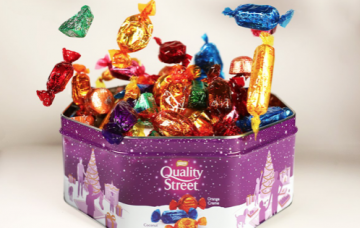 Which? poll settles the argument

It’s a debate that has raged within families since the invention of the assorted chocolate box — which one is your favourite and which do hate with a passion?

Now, though, it looks like it has been finally settled once and for all.

Consumer watchdog Which? has released a ranking of every single sweet in Quality Street, Roses, Celebrations and Heroes selection tubs.

A poll of more than 1,000 of its subscribers found that the Purple One is the nation’s favourite Quality Street flavour, closely followed by another regularly popular choice, the Green Triangle.

The surprising runner-up for the best-loved Celebrations chocolate was the coconut-filled Bounty, which often divides opinion.

The winner was the Malteser Teaser, with Milky Way propping up the table in last place.

Wispas proved to be the most sought-after treat in a pack of Heroes, while the Eclair is loathed the most.

When it came to Roses, most people prefer the Hazel in Caramel, ahead of the timeless Dairy Milk Chunk.

You’d think, then, that the makers would supply more of people’s favourites in each tub.

But Which? analysed the distribution of the different sweets found in Quality Street boxes and discovered this was far from the case.

There are just five favoured Purple Ones in a 720g box, along with only six Green Triangles, fewer than most of the flavours people don’t like as much.

The reason is because manufacturer Nestlé says it tries ensure an even balance of different broad types of treat.

It breaks them down into three distinct categories — fruit cremes, chocolates and caramel/fudge — and provides a third of each for every tub.

But there are more caramel/fudge varieties than any other, including the Purple One, so on average there are fewer of the nation’s favourite Quality Street in each tin.

And because there are just two fruit cremes, this is explains why there always seem to be a lot more Strawberry Delights and Orange Cremes left when the others have been grabbed.

Which? Magazine editor Harry Rose said: “Our analysis shows that it’s not your family’s fault that your favourite flavours disappear from the tub so quickly. There really are too few Purple Ones to meet popular demand.

“Of course, if you’re a fan of Strawberry Delights, Eclairs or Milky Ways, this will be welcome news – you’re more likely to still be eating chocolates into the New Year than your Wispa-loving friends.”

Mars Celebrations judged to be from best to worst were: Malteser Teaser, Bounty, Snickers, Mars, with Galaxy, Galaxy Caramel and Twix rated joint fifth, and Milky Way a distant last.

Which are your favourite and most hated chocolate box sweets? Leave us a comment on our Facebook page @EntertainmentDailyFix and let us know what you think!