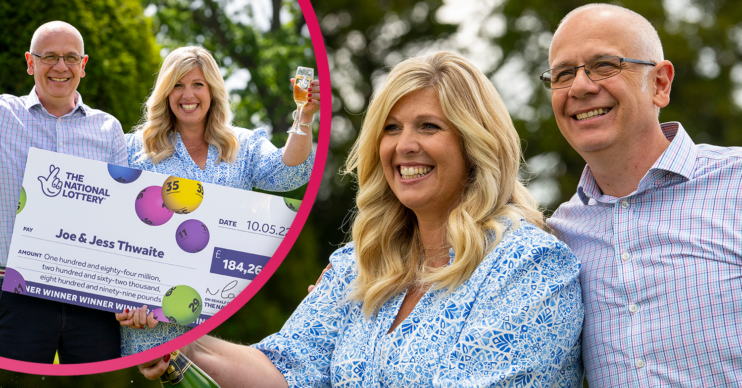 Neighbours say it shows what 'great people' they are

The UK’s biggest EuroMillions winners have reportedly made their first big purchase after scooping £184 million.

Joe and Jess Thwaite, from Gloucestershire, won the prize last month and decided to go public with the news.

Now it’s been claimed that the couple have started to spend their winnings, and their first big buy might just surprise you.

According to The Sun, the married couple have bought themselves a car.

However, it’s not reported to be a flashy sports car.

It’s clear the win hasn’t changed the couple after Joe spoke about his dream car shortly after winning.

Instead of citing a Ferrari or Maserati, he said would like a Skoda Superb “because of the amount of stuff you can get in the boot”.

The Thwaites’ new car also isn’t brand new, but it’s surely an update on the Hyundai Joe had been driving that was “covered in dents”.

The couple were pictured in their new car earlier this week.

And neighbours said that it shouldn’t come as a surprise that the “down-to-earth” couple have opted for an understated car.

One told The Sun: “They’re mega lottery winners but first and foremost they’re down-to-earth people who have worked hard their whole lives. The car is smart, respectable and sensible – just like Joe and Jess.”

The fact that they’ve not splurged it all on sports cars or booze shows what great people they are.

They also claimed that instead of “living the high life” they planning on doing up their original home.

“The couple are well liked by the neighbours and they want to make sure the house is put right. The fact that they’ve not splurged it all on sports cars or booze shows what great people they are,” they said.

Joe has handed in his notice

The couple, who have two primary school-aged children, have been married for 11 years.

Joe is already reported to have handed in his notice at work.

Jess, meanwhile, runs a hairdressing salon with her sister.

ED! has contacted National Lottery operator Camelot for a comment on this story. Camelot explained that the winners aren’t doing any further media.

Head to our Facebook page @EntertainmentDailyFix and tell us what you’d buy.