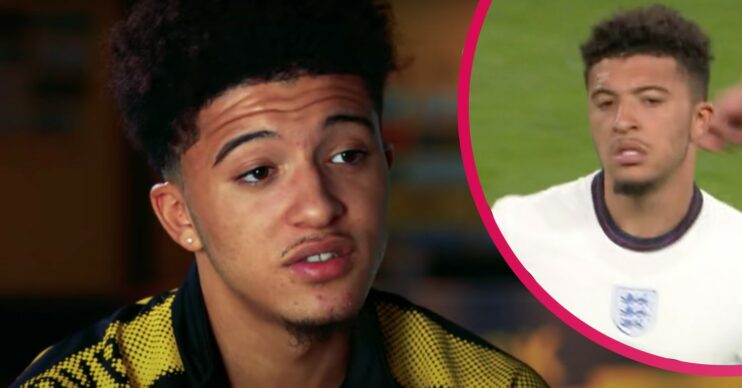 There's a touching story behind his ink

Jadon Sancho will make his first start in the England line up during Euro 2020 this evening, according to reports.

The highly-rated winger is expected to face Ukraine from the off after making only one substitute appearance so far.

He previously came on in the 84th minute against the Czech Republic after manager Gareth Southgate swapped him in for Bukayo Saka. Sancho is preferred over Arsenal favourite Saka as it is believed he has picked up a knock.

What other changes are expected England vs Ukraine?

Reports suggest Mason Mount could also return to the side to take on Ukraine.

However, Sancho’s inclusion is considered significant because Saka and Phil Foden have been preferred in his position so far.

This is despite Sancho – who plays for Borussia Dortmund in Germany – being a regular for the Euro 2020 qualifying campaign.

He also scored 16 goals for Dortmund last season. Sancho was also instrumental in his club winning the German Cup and qualifying for the Champions League.

But the 21-year-old also stands out with her numerous tattoos. Among his significant collection of ink are tattoos on his arms featuring The Simpsons, Sonic the Hedgehog and Spiderman.

Baby brother, we love you.

Jadon also has a poem in tribute to his younger brother as part of the sleeve on his left arm. It is reported his sibling passed away when Jadon was five.

It reads: “You and me will stay together, you made us happy, you brought us joy, you were a special baby boy. I couldn’t wait till you grew up, teach you football and win the cup. But you’re gone what can I do? Baby brother, we love you.”

What does the future hold for Jadon Sancho?

Sancho is expected to imminently transfer to Manchester United.

The club announced earlier this week (Thursday July 1) that an agreement has been reached in principle.

Read more: When is Casualty back? BBC drama set for return after Euro 2020 schedule disruption

The signing is still subject to contractual terms and a medical, due to be completed after Euro 2020.

Wouldn’t it be a great way for him to kick off his United career back in the UK with a few more goals for England to his name?

What time is the England game against Ukraine today?

England will play Ukraine in the Euro 2020 quarter finals this evening (Saturday July 3).

The highly-anticipated match starts at 8pm  – and there’s a place in next Wednesday’s second semi final at stake.

Fans can watch England vs Ukraine live on BBC One.

The crucial game will also air via the livestream on BBC iPlayer.