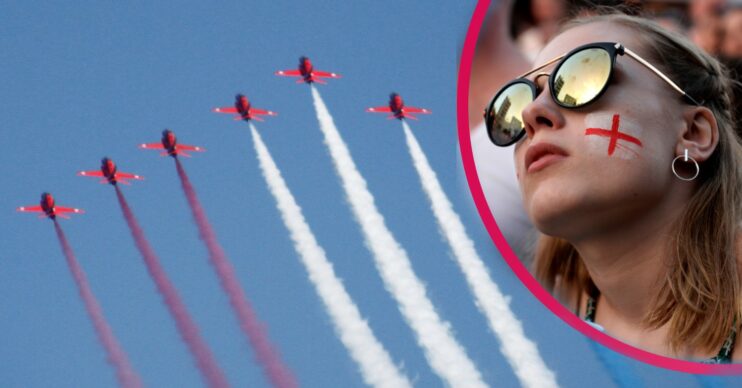 Can they inspire Gareth Southgate, Harry Kane and the boys?

Euro 2020 final viewers are in for a massive treat tonight – and we’re not just talking about the feast of football action that’s due to take place.

Before the game between England and Italy kicks off, legendary flight team the Red Arrows are going to be flying over Wembley Stadium.

It’s hoped that the spectacular display will add to what promises to be a truly momentous occasion, with England appearing in their first major final for 55 years.

But when are the iconic planes due to perform their flypast, and how can you see it? Read on to find out!

Euro 2020 final: When will the Red Arrows be flying over Wembley?

Officially known as the Royal Air Force Aerobatic Team, the Red Arrows were due to perform at the Goodwood Festival of Speed yesterday (July 10).

However, it ended up cancelled due to adverse weather conditions.

However, anyone left feeling disappointed by the no-show will get another chance to see the daredevil plane team before tonight’s Euro 2020 showdown.

The Red Arrows will set off from Bournemouth Aerodrome before making their way to Wembley in north London.

Read more: Prince William piles on the pressure as he sends message to England team

After performing their spectacular fly over – colours blazing from their tails – the planes will continue towards their base in Lincolnshire, where they’ll land at around 8.10pm.

What time does the match start?

Whichever channel you choose, you’re likely to see footage of the Red Arrows flying over.

The match itself kicks off at 8pm, and it’s fair to say the nation is going to be biting its nails.

You won’t need us to remind you that England haven’t triumphed in a football tournament since they won the World Cup in 1966.

Indeed, that was the last time they appeared in a final – until now.

Around 60,000 fans will be inside Wembley for the showdown against Italy – a team that hasn’t lost for 33 matches.

Among those in attendance will be Prince William, and the future king has sent a message of support to England manager Gareth Southgate and his footballing heroes.

Speaking on video, he said: “To Gareth, Harry [Kane] and every member of the England team on and off the pitch, I just want to wish you the very best of luck for tonight.”

He concluded the video by telling them: “You bring out the very best of England and we are all behind you. The whole country is behind you.

The Euro 2020 final is showing live on both BBC One and ITV tonight, with coverage starting at 7pm on both channels.