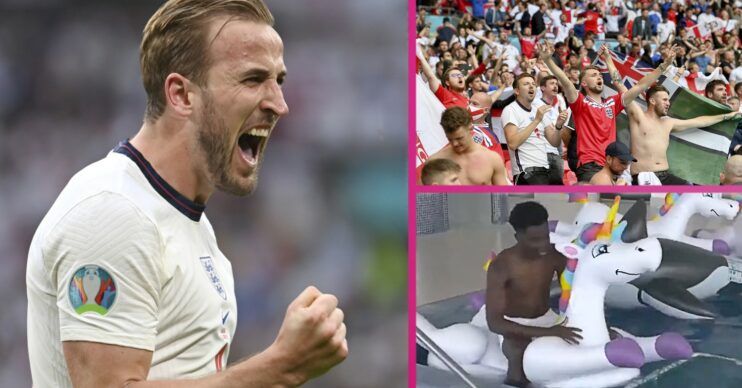 Euro 2020 final: Our favourite England memories from a tournament where football came home

After the Euro 2020 final, we’re bereft – the whole tournament was an amazing experience for the whole country, capped by England almost going all the way.

After a year of coronavirus doom and gloom, it’s been so great to enjoy a sporting event again that brought the nation together.

And now it’s all over.

But what has been our favourite England moments that will stay long in our memory?

Manchester City star Raheem Sterling has copped so much flak over the years.

In fact, many were calling for him not to be in the starting line-up against Croatia in England’s first game of the tournament.

Read more: OPINION: Why Gareth Southgate needs to be knighted after Euro 2020

However, manager Gareth Southgate stood by him and Raheem paid him back.

During that match, Raheem scored the winner against a team that England lost to in the semi-finals of the World Cup three years ago.

It was sweet revenge for England and sweet vindication for Raheem Sterling, who went on to become one of England’s players of the tournament.

England v Germany on the way to the Euro 2020 final

If England had demons against Croatia, they were nothing compared to the bottled-up angst they felt for Germany.

The last time England had beaten their nemesis in a knock-out tournament was 1966.

On a sunny, warm summer afternoon at Wembley in June, the class of ’21 let go of decades of hurt and dispatched Germany 2-0.

The stadium went nuts, as did the whole country – Gareth’s boys finally got one over their bitter rivals.

After a horrendous year full of lockdowns and social distancing, Wembley welcomed fans into games for the first time in what seemed like ages.

Even though the stadium was less than half full, they produced an amazing atmosphere during the Germany game.

Around England, streets and pubs were also full of people celebrating.

And with increased capacity for the semis and the final, we think we can safely say that football – and normal life – is on its way back from the brink.

Too slow they said. Past it, they reckoned. Not good enough some even muttered under their breath.

England captain Harry Kane was up against it after three relatively poor showings in the group stage against Croatia, Scotland and the Czech Republic.

But while many clamoured for him to be dropped, Harry just kept saying the same thing: give me a chance and I will score.

So when he broke his Euro 2021 duck against Germany, and then scored another two against Ukraine, the doubters had to eat humble pie.

Grime superstar watched Stormzy the England v Germany game at Boxpark in Croydon, where he promised a group of lads that if England won he would come to their house party.

Imagine their surprise when he kept his promise.

Nothing like football to bring the nation together, including fans and superstars.

Left-back Luke Shaw emerged as a star in this tournament.

The Manchester United player had received relentless criticism from his own club boss, Jose Mourinho, for so long and endured terrible injuries.

So much so, he received praise from legendary former Brazil left-back, Roberto Carlos. And now he goes by the nickname of Shawberto in the England camp, because why not?

And let’s not forget, Shawberto scored in the Euro 2020 final, fiving all fans hope.

Jurgen Klopp is ready for England-Germany 😂😂

During the Germany game at Wembley, reporters were stunned when they saw what they thought was Liverpool’s German manager, Jurgen Klopp, in the crowd.

He was downing tinnies and singing Football’s Coming Home with the rest of the fans.

The lookalike was so uncanny, he completely duped reporters, who had photos taken with him.

Turns out he was a 61-year-old Londoner called Ray.

Twenty-one years ago, the England team – Gazza and all – prepared for England games at Euro 96 by going out on the lash and getting slaughtered.

Unexpected? Yes. Wholesome? Absolutely. Did we love it? Without doubt.

Rob Beckett’s throwback look is all of us

Comedian Rob caused a viral sensation when he posted an image of himself at Wembley during the Denmark semi-final.

Wearing a bucket hat and an old-school England tracksuit top, it was like he was off to a 90s rave.

And he was partying well into the next morning!

He led from the front with dignity and integrity, and wanted the whole of England to invest in the national team.

And didn’t we just.

Read more: How Gareth Southgate nightmare penalty miss in 1996 has driven him to thrive as England manager

So much more than a football manager, the enduring image will be of Gareth consoling Bukayo Saka after his penalty was saved in the agonising shoot-out in the final.