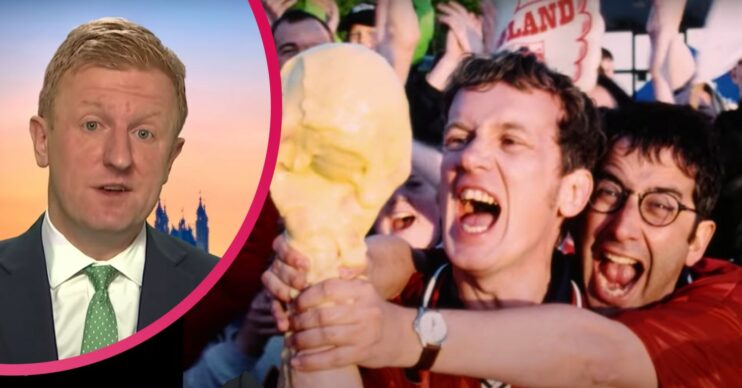 Tories told they could scupper England's chances of hosting in 2030

The national team have reached the final of a football tournament for the first time since the 1966 World Cup.

And, although members of Boris Johnson‘s government have switched from criticising players for taking the knee to attaching themselves to England’s footballing achievements by draping themselves in the flag of St George, it seems ministers are still occupied with even further political gestures.

Euro 2020 final news: ‘This does not go down well overseas’

According to Mail Online, ministers have been warned to tone it down when barking: “It’s coming home.”

And, in diplomatic terms, this could apparently hamper England’s efforts to secure a future World Cup.

The UK and Ireland are regarded as the second favourites to host the tournament in a joint bid.

What were ministers briefed?

The Mail claims officials in the Department for Digital, Culture, Media and Sport have advised MPs to rein it in.

An email is quoted as saying: “As stressed before, please do encourage your ministers not to use ‘it’s coming home’ with the news media and social media.

We know this does not go down well overseas.

“I know we’re swimming against the tide, but we know this does not go down well overseas.

“Strategically we need to do all we can to make ourselves welcoming to the football authorities when the UK and Ireland is scoping out a bid for 2030.”

Has Boris Johnson been watching his mouth?

The Prime Minister looks to have had the flag decorators in this week. Scores of flags have been pinned to the outside of 10 Downing Street following England’s mid-week win against Denmark.

However, the PM did seem to be unusually particular with his words as he failed to echo Baddiel and Skinner and declared: “Let’s bring it home.”

Similarly, Culture Secretary Oliver Dowden – who heads up the Department for Digital, Culture, Media and Sport – failed to mention the phrase in a piece for The Sun today.

His tabloid tubthumping about England’s chances in the Euro 2020 final also did not mention “it’s coming home”.

How England fans have reacted

Online commenters did not seem to be impressed with the strategy – even if the ultimate hope is for the UK to have home advantage again.

One person moaned: “Aren’t they supposed to be supportive of everything British, and on this occasion, English? An overhaul of these overpaid, nothing better to do, jobsworths is well overdue.”

“Where will this lunacy stop?” pondered another exasperated commenter.

“It’s an England football song. Are all the Carolines annoyed as well that the football fans have adopted Neil Diamond’s Sweet Caroline as England’s signature tune during this tournament?”

And a third person fumed: “Can we please tell these idiots to just SHUT UP. It’s a song and we will sing it if we want to.”