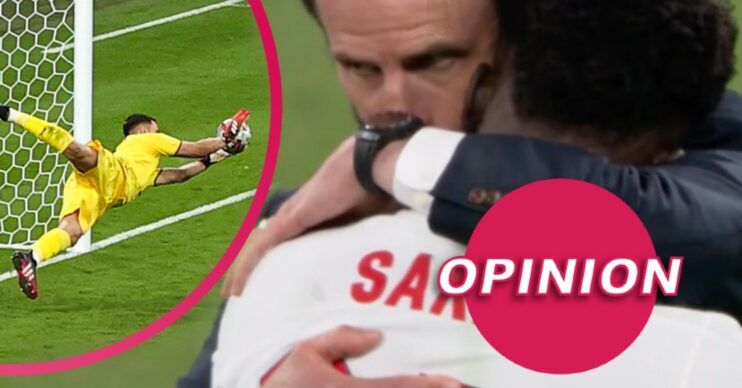 Euro 2020 final: Why penalty shoot-outs should be scrapped…

Such a cruel way to end a football match!

The Euro 2020 final came down to penalties once again, and a nation held their collective breath.

We know the score, we know what happens to England in penalty shoot-outs. More often than not they lose.

But after last night, and seeing the despair on the faces of the likes of Marcus Rashford, Jadon Sancho and Bukayo Saka, the role of penalties in deciding such huge games should be reappraised.

Euro 2020 final: surely there has to be a better way

Seeing those three young lions stride up to the penalty spot in the glare of such pressure and spotlight recalled so many of England’s nearly moments.

In total, England have been involved in 10 penalty shoot-outs in major tournaments, and have lost seven of them.

That’s not a great record, and the media like to drive the narrative that when it comes to shoot-outs England might as well forget it.

But behind the stats, there are very real, human stories. Players who miss penalties in shoot-outs carry this burden for the rest of their lives.

Chris Waddle and Stuart Pearce in Italia 90, Gareth Southgate himself in Euro 96, Paul Ince and David Batty in World Cup 98 and Darius Vassell in Euro 04.

And now, heartbreakingly, three young boys who have earned the respect of so many, will also bear those scars.

The arguments for and against

There are two arguments for penalties.

First, they’re cruel and and a brutal way to end games. Especially if they’re in high-profile semi-finals or finals.

After blood, sweat and tears for 120 minutes, it seems unedifying and entirely down to luck in a penalty shoot-out.

Teams can also, after being dominated in normal time, adopt defensive tactics to make sure they get to penalties, where their chances of winning are suddenly improved.

The counter-argument is that a penalty shoot-out is the supreme test of skill, nerve and bottle. Goalkeepers, too, develop specialised techniques and tactics, as do the penalty takers themselves.

It’s a duel to the footballing death.

Once upon a time, if two teams could not be separated after extra time, there used to be replays.

Can you imagine, in this day and age of sponsorship, TV deals and the need for instant resolution a replay?

So I get penalties, I really do. But sure there has to be something better?

What are the alternatives?

Over the years lots of things have been mooted.

One-on-one shoot-outs dribbling from 35 yards out (where a play runs towards the goal with the ball and shoots from a certain area), corner competitions and taking stats from earlier in the game to decide the outcome (possession, shots on target).

And then there’s the ‘golden goal’ (first goal in extra time wins), ‘silver goal’ (if a team is leading at half time of extra time, they win), and extending extra time.

The ‘golden goal’ idea seemed to work, but governing bodies scrapped it.

So at this moment in time, there’s nothing else other than penalties.

That doesn’t mean I have to like them. It’s not sour grapes (Italy were by far the better team and deserved to win), it’s just a case of: surely there has to be something better to decide games of this magnitude?