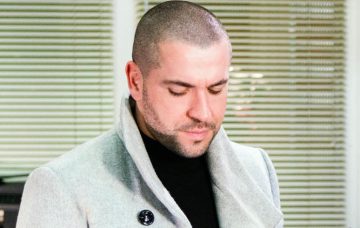 Shayne Ward admitted he “bawled like a baby” after filming his dramatic final scenes on Coronation Street.

The star, who plays Aidan Connor, will leave the soap on-screen next month – and has already enjoyed a boozy goodbye party with colleagues from the Cobbles.

But the 33-year-old has now revealed how he struggled to keep it together during his last moments on the Corrie set, saying Aidan’s shocking departure will live long in the memory for fans.

Read more: Corrie’s Shayne Ward had to be carried out of his own farewell party

“I had a bit of a breakdown when I filmed my final scene,” he told The Daily Star On Sunday.

“It’s one of Corrie’s most shocking exits.”

Shayne has previously hinted viewers will be taken aback by the way Aidan leaves Weatherfield.

“I think people will be shocked by my leaving storyline, definitely,” he said.

“I can’t say anything about it but I promise it will be worth tuning in for.”

However, co-star Cath Tyldesley is still filming on set after Shayne’s exit, so it does not appear their characters Eva and Aidan will be moving on together.

Many fans have speculated Aidan may be ill due to his increasingly unpredictable behaviour.

Shayne’s exit comes three years after he joined Corrie, having first shot to fame on the second series of The X Factor in 2005.

Since arriving in soapland in 2015, Shayne has been involved in a number of major storylines – including his character’s illicit affair with Maria Connor behind the back of his fiancée Eva Price.

Eva is currently expecting Aidan’s baby, but he has no idea – and she has promised to hand the tot over to Toyah when it is born.

But how do you think Aidan could be written out?

Will you be sad to say goodbye to Aidan Connor? Let us know what you think by leaving us a comment on our Facebook page @EntertainmentDailyFix!