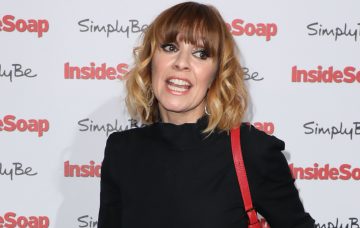 She has two children

The Emmerdale actress – who has Violet, 14, and Stan, 10, with her husband and co-star Jeff Hordley – explained she wants to make sure she is a “good role model” to her kids.

Speaking to the Mirror, she said: “Getting older is not great. I don’t love the ageing process but, that said, I am not prepared to do anything about it in terms of cosmetic surgery, because I’m terrified.

“I have a daughter and a responsibility to her to not starve myself, not inject things into my face.”

Zoe said she wants to be a “good role model” for her daughter and son and her “most important job” is her children.

She continued: “I love this job, I love being an actor and I wouldn’t give it up for anything. But my main job is being a parent, so I have a responsibility to my son and my daughter. It is not a road I would go down. There is a lot to be said for just going with the flow.”

The 45-year-old star – who plays Rhona Goskirk on the ITV soap – added that she doesn’t think she’d have dealt with the world of social media if it had been around when she was a child.

She admitted that if she had been at school now, she “wouldn’t have coped well with social media”.

Zoe said she’s aware that her daughter is on social media but she’s “mindful” that she has “to do more than my bit to keep her on an even keel”.

She added that she finds it “terrifying”.

Zoe also insisted she is a “better parent” after going teetotal.

She said she’s “not drinking at the moment” and she’s “enjoying it” because “everything feels better – my energy levels are better, I am a better parent”.