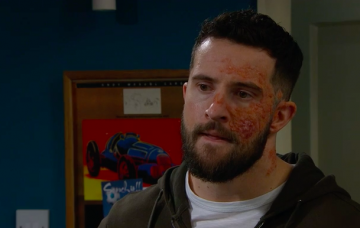 Ross is going to have to take matters into his own hands if he wants justice for his acid attack.

Ross Barton is going to explode at the police when they close the case on his acid attack.

The mechanic, played by Michael Parr, will be left furious next week when he’s visited by a detective who tells him the case will be closed and then hints that there’s something Ross has done to cause it.

Viewers know that Ross was attacked by Simon by mistake after he thought he was Joe Tate.

But the police now think Ross was involved in something dodgy that caused him to be targeted for the attack.

Having been told the awful news by the police detective, Ross explodes, telling him: “You’ve heard the rumours about me and thought he’s no angel, I bet he had it coming.

“You’ve hit a brick wall so you thought you’d come round here and put it on me.

“I’ve already told you, I don’t know why he did this.

He added: “He just chucked some acid into my face for no reason I can work out and now he’s got away with it.”

Unfortunately Ross’s words changed nothing with the policeman telling him: “Sorry Mr Barton but the case will remain closed unless any new evidence comes to light.”

A furious Ross then grabs his coat and storms out of the house.

But could his fury be connected to the shock death coming to the village next week?

One major character will die in Thursday’s episode and it’s set to be a tearjerker.

Who do you think it will be? Head to our Facebook page @EntertainmentDailyFix and let us know what you think!