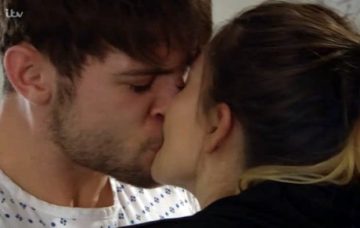 Is there a future for the pair?

In dramatic scenes shown in last night’s Emmerdale (Thursday 3 May), Debbie Dingle saved the life of her ex-boyfriend Joe Tate after he recklessly jumped off a quarry into a lake.

Although she didn’t need to give him the kiss of life, she did administer CPR and bought his unconscious body back to life.

And, yes, later the pair shared a highly-charged kiss which didn’t exactly save his life, but did bring him hope that the pair might get back together.

In a new interview with the Radio Times, actor Ned Porteous admits that his character Joe would love to rekindle the flame with Debbie.

After all, they do make such a good match and have so many similar traits. For example scheming, lying, with more combined skeletons in their closet than the Addams Family.

Joe jumped into the lake to prove himself to younger brother Noah, but the dare went disastrously wrong when Joe didn’t resurface.

And, when he did, he wasn’t breathing.

Luckily, Debbie arrived and rescued him.

Later at the hospital, the pair kissed and Joe realised his true feelings.

Ned reveals: “When Joe comes round in hospital all his feelings for Debbie come flooding back. He needs to believe she feels the same way for him and manages to steal a kiss, but she’s not in the best head space right now.”

Although Debbie made a hasty exit, conflicted by her emotions, Ned admits that Joe is very clear on his feelings.

He says: “Joe doesn’t know where this is going to go, but he knows he wants to be with Debbie and he does love her. But does he believe she loves him back?”

Next week, aware that their reunion would not be welcome by some parties, the pair hook up at Home Farm… Only someone bursts in on them!

Do you think Debbie and Joe deserve each other? Leave us a comment on our Facebook page @EntertainmentDailyFix and let us know what you think!