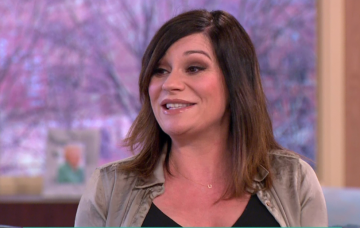 Emmerdale’s Lucy Pargeter has revealed running around after three children has helped her get her pre-baby body back.

The actress, who plays Chas Dingle in the soap, told the Sunday Mirror she didn’t make a conscious effort to lose her baby weight after having twins Missy and Betsy last year.

When asked the “secret” of her trimmed-down figure she joked: “I don’t have time to eat! It gets to 7pm and I realise I’ve just picked off the kids’ plates all day.

“My arms have become toned from picking up the babies – one on each side is quite the workout.”

Lucy, 41, had the twins in April 2017 with her fiancé Rudi Coleano following IVF treatment. She also has a daughter, Lola, 13.

While she has lost her baby weight, Lucy is still having to carry extra pounds in her role in Emmerdale as her character is currently pregnant.

The actress has to wear a fake bump which she said is more uncomfortable than the real thing!

Sadly, the outcome of her character’s pregnancy is going to be much different to her own. Chas has been told her baby has a rare condition that means it’s unlikely to survive outside the womb for more than a few hours.

She’s been in denial about the situation and hoping for a miracle.

Lucy said it’s difficult filming the harrowing scenes but she tries not to let it affect her home life.

“There have been a few quotes in the dialogue where I’ve been in tears just reading it. But even though it can be quite full-on, when I walk through the door at the end of the day, I put it all behind me – with three kids, I don’t have time to take my work home with me. I just switch off and realise how lucky I am,” she said.

Lucy has previously spoken of how difficult it was to conceive her twins.

The couple tried for a baby for 11 years and were delighted that their IVF treatment was a success, after being warned they only had a 20 per cent chance of conceiving.

She told OK! last year how happy they were to complete their family after the twins were born.

She said: “(We will) let them know how special they are and how much they were wanted and how easily it could have been that they weren’t here.

“Having IVF was hard but we feel so lucky the girls have come along.”