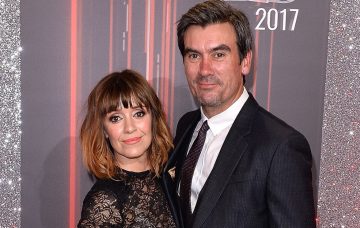 They having been holidaying in Ibiza

Jeff Hordley and his wife and Emmerdale co-star Zoe Henry have enjoyed a romantic getaway in Ibiza.

The actor, who plays Cain Dingle in the soap, shared a photo to Twitter showing himself and Zoe on a boat on the island.

The loved-up couple sported matching yellow sunglasses as they soaked up the sunshine.

Jeff, 48, captioned the pic: “Amazing weekend in Ibiza with @ZoeHenry03 Thanks to @chrisvdk for bringing us our #SunnyDundee glasses!”

Fans gushed over the sweet picture.

One person said: “Looking amazing you two!” while another added: “Very beautiful couple! Hope you are enjoying your holiday.”

A third wrote: “The pair of you look so happy.”

Jeff and Zoe, 44, were childhood sweethearts and they went on to wed in 2003.

They have since had two children together – a daughter named Violet, born in 2005, and a son called Stan, born in April 2008.

Last year, Zoe – who plays Rhona Goskirk in the soap – opened up about the secret to hers and Jeff’s marriage.

Speaking to Love Sunday magazine, she revealed why the couple are still so happy after many years together.

She said: “We really do make each other laugh, and I’ve always looked for that in a partner.

She continued: “We laugh at how middle aged we are.

“Jeff being a so-called sex symbol is one of the most amusing things in my entire life. I remind him of that constantly, especially first thing in the morning when he looks anything but.”

The actress also opened up about being parents to their two kids, saying she and Jeff juggle everything evenly.

She added: “Jeff and I juggle everything 50/50. We wear a trouser leg each and take it in turns to be good cop, bad cop with the kids.”

Can you relate to Zoe’s comments? Let us know what you think by leaving us a comment on our Facebook page @EntertainmentDailyFix!