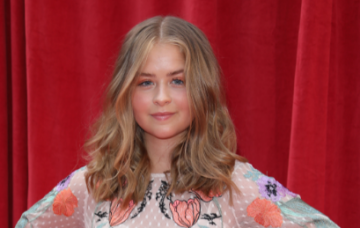 Isobel Steele has spoken out after a fashion journalist told her to “flash a bit of flesh” following her appearance at last weekend’s British Soap Awards.

The comment appeared in an online tabloid report critiquing the dress choices of numerous actresses who attend the ceremony at London’s Hackney Empire.

The writer criticised the 17-year-old Emmerdale star’s choice to “cover up from head to toe”.

Isobel was shocked to discover the article focusing on the ‘worst-dressed’ attendees at the annual awards, the morning after scooping the Best Young Actress accolade for her flawless portrayal of Liv Flaherty.

She took to Twitter to question why such a thing had been written, accusing the story of trying to knock people’s confidence. 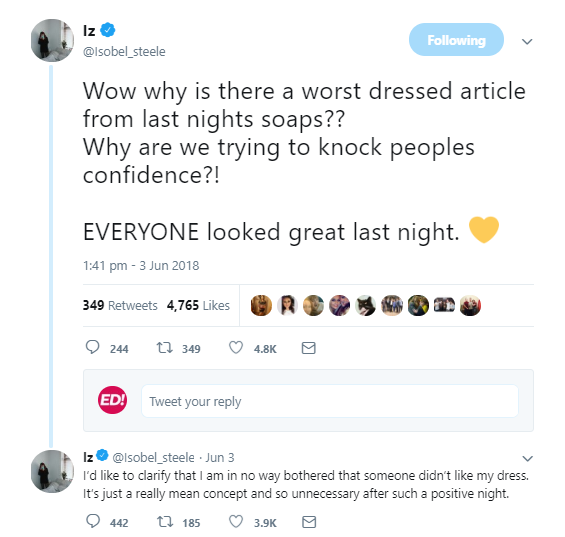 Corrie actress and all-round Twitter hero Sally Ann Matthews then shared an horrific story about her being called “a little pudding” by a journalist when she was just 17 some 30 years ago.

When I was 17 a tabloid columnist called me a ‘little pudding’, I know the impact it had on me. 30 years later and it would appear that some journalists are still archaic x #SoapAwards #WearWhatYouWant

Other famous faces from the soap world shared their dismay at the tone of the article. 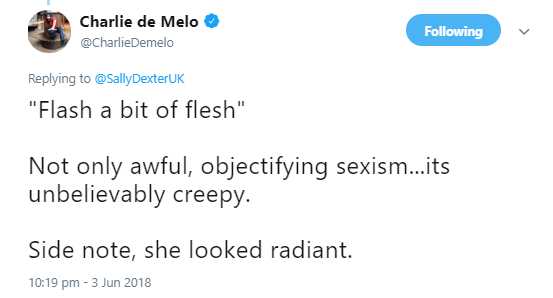 Corrie’s Cath Tyldesley tweeted: “She looks beautiful… this is outrageous,” and her co-star Georgia Taylor added: “‘Flash a bit of flesh’ ?!?? Ffs. Gross. That young lady is a class act and looked stunning xx.”

The paper apologised and removed the offensive comments.

“There’s been people from all of the soaps saying they think it’s out of order,” Isobel told BBC’s Newsbeat today.

She added that, although the article had put a bit of a dampener on the night, it hadn’t ruined it for her.

“I’ve still won best young actress. I’m really pleased and everyone had a great night,” she continued. “Hopefully we can put this behind us and focus on the night rather than what we were wearing.”

Who were your favourite winners at the awards? Leave us a comment on our Facebook page @EntertainmentDailyFix and let us know what you think!