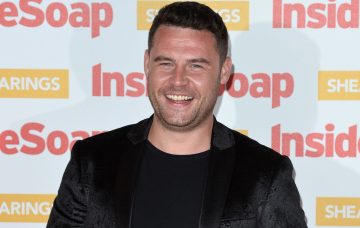 They have such a close bond

Danny Miller has shared sweet pictures of himself and Emmerdale co-star Isobel Steele at the Inside Soap Awards on Monday night.

After Danny, 27, won the Soap Superstar award and Isobel, 17, bagged the Best Young Actor gong, the pair – who play on-screen siblings in the soap – cuddled up for a snap with their trophies at the ceremony’s after-party.

Danny, who plays Aaron Dingle, took to Instagram to share a pic of himself with his arm wrapped around Isobel as they held their awards.

He captioned the post: “Dream team,” followed by a red love heart emoji.

Danny later posted a photo of himself and Isobel hugging each other as they smiled for the camera.

The pic was captioned: “My absolute BFF,” followed by another red love heart emoji.

Fans went wild for the photos with many gushing over the pair’s close bond.

One person said: “So deserved. You look so alike, you could be brother and sister in real life!” while another gushed: “This is such a cute photo.”

A third commented: “Congratulations to you both! So well deserved! Such a lovely photo.”

Isobel also posted a picture of herself and Danny at the event, alongside the caption: “THANKYOU for voting for me!!! I Really appreciate it. The best night.”

Meanwhile, Danny also took to Twitter to praise Isobel for winning an award as well as congratulating his fellow co-stars.

He wrote: “So buzzing for @Isobel_steele – deserves recognition! And all of our winners… #EmmaAtkins especially!!”

Me and the best actress in soap. One of my best friends in the world! Amazing lady! @missemmaatkins love you angel ❤️

Taking to Instagram, Danny shared a snap of himself kissing Emma on the side of her head.

He wrote: “Me and the best actress in soap. One of my best friends in the world! Amazing lady! @missemmaatkins love you angel.”