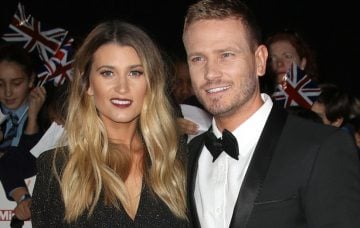 They took a family holiday to Walt Disney World Resort!

Emmerdale’s Charley Webb and Matthew Wolfenden have revealed they took their children on honeymoon with them – plus Matthew’s parents!

The soap co-stars married in a secret ceremony earlier this year and have now shared pictures of their honeymoon to Florida’s Walt Disney World Resort with OK! Magazine.

Well, they couldn’t go to Disney and not bring the kids, right?!

Charley, 30, and Matthew, 38, are parents to sons Buster, eight, and two-year-old Bowie.

The couple posed with their children in Florida for this week’s OK! Magazine, out now, where they also opened up about their idyllic honeymoon and why they took the kids with them.

Charley, who plays Emmerdale’s Debbie Dingle, explained: “We don’t get loads of time off from work and, even though we’ve just got married, it was our family holiday too, so it was important we spent that time together as a family.”

Husband Matthew, best known as David Metcalfe, agreed, saying: “There’s no way in a million years we could be away from the kids for two weeks. We got to celebrate with the family anyway, which was lovely.”

The couple, who said they didn’t spend one night without the children on honeymoon, were also joined in Florida by Matthew’s parents.

Charley and Matthew stunned friends and family by pulling off a secret wedding at Ripley Castle in North Yorkshire earlier this year.

They tricked guests into thinking they were attending a 30th birthday bash for Charley, only to be told it was actually a wedding!

Matthew said: “I wish we could get married again as it was such a whirlwind.”

Charley agreed, admitting: “I felt depressed after the wedding because it took so much time to plan and I’d built it up and suddenly it was over. I had the post-wedding blues!”

Charley was walked down the aisle by her brother, ex-Hollyoaks and I’m A Celebrity star Jamie Lomas.

In an interview with Loose Women after the secret ceremony, Matthew said it was a “very untraditional” wedding with no speeches, as none of the wedding party knew there was a wedding until the big day!

They also did their stag and hen nights after the wedding itself.

Matthew also spoke about their kids, saying Buster was “fantastic” as he is so open with his parents and will talk to them about anything.

As for whether the couple will ever try for a third child, Matthew said: “Oh God, yeah. I’d have a football team but it’s not me who has to go through all the hard work, is it? We will definitely go for number three. We aren’t trying at the moment. We have five years between the two at the moment but we’d like a smaller age gap with a third. We’d quite like a girl but we’ll see, my family are all boys and we have two boys now.”

Would you or did you take your children on honeymoon? Leave us a comment on our Facebook page @EntertainmentDailyFix and let us know what you think!