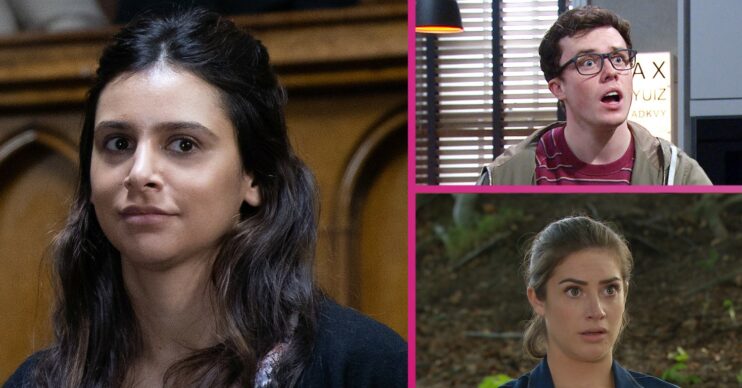 Fans have noticed multiple plot holes in the soap

Emmerdale serial killer Meena has been on trial this week for the murders of Ben Tucker, Andrea Tate and Leanna Cavanagh.

However fans have pointed out a few plot holes in the trial. What are they?

1. Emmerdale: Why aren’t there more witnesses at Meena’s trial?

Emmerdale fans have been questioning why only Liam and Manpreet were called to testify against Meena.

Meena has committed numerous crimes during her time in the village, hurting many people.

Not only did she attempt to drown Victoria Sugden, she also kidnapped and tried to kill Vinny Dingle and took Billy and Dawn hostage on her wedding day.

She was also in a relationship with David Metcalfe for months.

None of them were called to testify and given everything Meena had done to them fans find that strange.

#emmerdale why haven’t vinny and Layla and dawn and billy been called , stupid meena trial

How on earth is Vinny not there. He can talk about being held hostage. It’s a farce, the whole thing. It’s pathetically done. How can she not be guilty of shooting Leyla etc. makes me sick, this is la la land, not Emmerdale #emmerdale

2. Emmerdale: Where is the video of Meena trying to kill Victoria?

Last year, at the survival challenge Meena tried to drown Victoria when she discovered her unconscious at the bottom of a waterfall.

Meena overheard that her boyfriend David planned to leave her to be with Victoria and she didn’t take it well.

Later Meena discovered Ben found the video. To keep him quiet, she killed him.

The video footage was later found and used to charge Meena, but why hasn’t it been used in court?

Is the court just gonna forget about meena’s trophy box, the camera footage and the fact she had half of the Yorkshire Dales police force looking for her after she done a runner for 2 weeks? #Emmerdale

During the court scenes, Meena mentioned she was pregnant with either Liam or Billy’s child. But she said miscarried in the Woolpack explosion.

However Liam discovered there was nothing on Meena’s medical record indicating to a pregnancy.

Fans were left wondering how Meena got away with lying about the pregnancy when they could have proved she was lying about having a miscarriage.

I mean. Surely the jury would be told or shown that there was no medical evidence #meena was pregnant so it would be obvious she was lying?! #emmerdale

While Manpreet was testifying, Meena found a way to torment her sister in court, putting a heart sign up to her.

But fans questioned how no one noticed her gesture to Manpreet.

And the jury don’t see Meena doing that?! FFS #emmerdale

#emmerdale Meena openly mocking the witness right there in court, and NOBODY. Not the judge, the lawyers, or the jury, noticed. It's like the writers gave her super powers to only be seen by those she wants to see :/

Meena has been working her charms on her prison guard, Ian.

He began sneaking things into her cell, But it seems odd a prison guard, who has been through a lot of training, would risk his job for Meena.

What's going on with Meena and this prison guard? It's very strange.#emmerdale

Nadine Butler was Meena’s first victim, who she murdered before her life in the village.

Nadine’s death was ruled a suicide as Meena managed to cover her tracks. However the police were initially suspicious that foul-play was involved.

Now Meena is on trial, it seems strange they wouldn’t reopen Nadine’s case and investigate further to see if Meena was involved.

7. Where are Ben and Andrea’s family?

Andrea and Ben were both murdered by Meena, however none of their family members have turned up to court for the trial.

We know Andrea’s mother Hazel has returned for Andrea’s memorial, but why wasn’t she at the trial?

It’s also been mentioned that Andrea has a sister, but she’s never been seen on-screen.

Ben’s dad was an alcoholic and appeared in a handful of episodes.

However none of their family members have turned up to Meena’s trial, which fans find strange.

None of Andrea’s family at the trial. Or Ben’s. They should be sued for calling it the “trial of the century” #Emmerdale

What do you think of the trial?