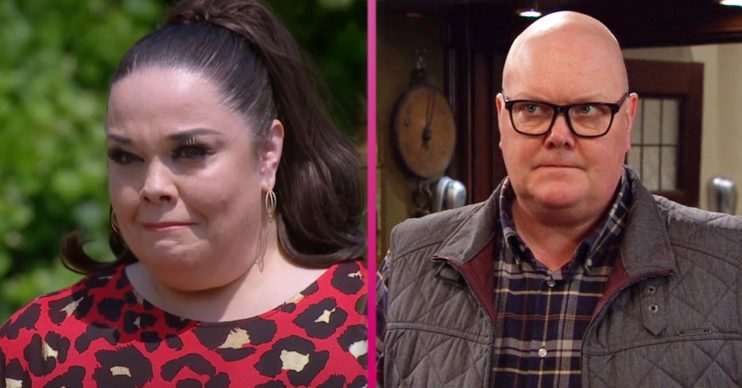 Emmerdale: Lisa Riley teases ‘something will happen’ with Mandy and Paddy

Mandy and Paddy were once married

Emmerdale star Lisa Riley has teased ‘something will happen’ with her alter ego Mandy and her ex-husband Paddy.

Recently Mandy got back together with her ex-boyfriend Paul, who abandoned her and Vinny in the past whilst he struggled with his gambling addiction.

But what Mandy doesn’t know is Paul is gambling again. Paul’s son Vinny discovered his father’s deception and gave him another chance, wanting to believe his dad could change.

However Vinny decided to keep Paul’s gambling a secret from Mandy.

Speaking in next week’s issue of Inside Soap about future storylines, Lisa teased: “There’s some darkness coming up with Paul and Vinny, while Mandy is on cloud nine. A curveball is coming up and it’s unbelievable – viewers will think: ‘How would I deal with this?'”

Emmerdale: Lisa Riley teases something will happen between Mandy and Paddy

Lisa then added that something will happen between Mandy and Paddy.

She continued: “Also, something will happen between Mandy and Paddy. It doesn’t have to mean anything naughty – there’s nothing wrong with being best friends with your ex.

“Plus Mandy takes over the salon and there’s so much coming up with salon wars between Mandy and Leyla – it’s the comedic version of Lady and the Tramp.”

Currently Paddy and Chas are also going through a rough patch.

The two constantly seemed to be arguing and Chas appeared to grow closer to Al Chapman. But after Paddy found out that Chas had tried it on with Al, he tried to forget about the situation.

Paddy’s father encouraged him to talk to Chas about what had been going on. However the couple soon realised it would be best to spend time apart and Chas went to stay with her niece Debbie in Scotland.

Will Mandy and Paddy be there for each other through tough times?