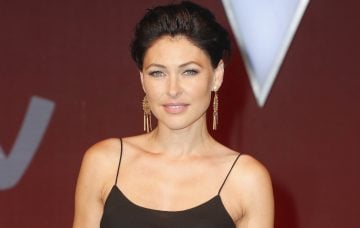 It was to celebrate her youngest daughter's second birthday

But she made an exception on Friday night in honour of youngest daughter Trixie’s second birthday. Aww!

Unsurprisingly, given Emma and husband Matt’s desire to keep their kids out of the limelight, the image of Trixie was taken from above, so the little girl’s face wasn’t visible.

She also tagged in the baker, bespoke cake maker Meesh’s Cakes in London, saying: “Cake went down a treat.”

Meesh’s Cakes, meanwhile, shared its own image of the cake, giving fans a more up close look at the intricate design. Gorgeous!

Fans were quick to wish little Trixie a happy birthday, with many saying they couldn’t believe she was two years old already.

Another simply said: “Aww it’s so lovely to have a tiny peek at urs an Matts children. Thank you. (sic)”

Emma has previously described Trixie as the “perfect” child and said she’s relishing in each step of Trixie’s development as she won’t have any more children.

She told Loose Women: “Because I know this is my last, I feel like I’m making the most of every single little bit because I know I won’t do it again.”

Emma told the TV show she and Matt had been enjoying getting back to a routine following the births of Isabelle and Ace, but decided to have one more child just before Emma turned 40.

“It was lovely, we were sleeping again, [Isabelle and Ace] got on brilliantly, it was an even number, then I was getting to 40, and my mum had my little sister at 40 as well, and it was her third, and I always thought I’d do the same, as I’m obsessed with my mum and she’s amazing.

“I kind of felt like I was getting me back, the kids had gone to school. I had a bit of me time again which I felt I hadn’t had for seven years.

“Then I thought it doesn’t matter, really, if we can have one more and it’s what we want and God willing it happens, then why am I worried I’m going to the gym again and I feel great, as I can do that in another few years.

“She is amazing, she’s like the perfect child! She’s started standing and she’s so excited about it. She’s slotted in.

“Isabelle and Ace are incredible with her, they’re obsessed with her.”

Emma, 42, and Matt, 34, have always kept their children away from social media, although Emma recently said that Isabelle is at an age where she’s starting to express an interest in Instagram.

“It terrifies me,” she told The Sun. “We’re trying to teach Isabelle what it is, how it should be used, the dangers of it and the meanness that can come from it. She’s young, but she’s aware, and I think as soon as kids are aware of stuff you need to start educating them.”

Emma added in a separate interview with Stylist magazine: “My daughter has an iPod; I was flicking through the pictures and saw she’d been taking selfies. I asked her, ‘Why do you have to pose with your lips like that? Your lips are huge, you don’t need to push them out more.’

“But it’s the world they live in. The only thing I can do is try to educate her in the most level-headed way possible.”

Do you worry about your kids and social media? Leave us a comment on our Facebook page @EntertainmentDailyFix and let us know what you think.