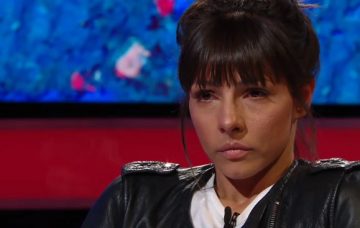 She left no stone unturned when quizzing Roxanne...

Former Emmerdale star  Roxanne, 35, returned to the Channel 5 programme to apologise once again for accusing fellow housemate Ryan Thomas of punching her during what appeared to be a play fight.

One viewer tweeted: “The interview we all wanted, the things we wanted said were said, Emma gave Roxanne the grilling she deserved. The apology wasn’t sincere. I just hope Ryan enjoys the rest of his time & wins the whole thing!”

Another said: “Roxanne’s exit interview was expertly handled by Emma, especially considering the seriousness of the accusations.”

A third agreed: “Just watched Emma’s interview with Roxanne. Massive amounts of respect for the way Emma grilled Roxanne. Didn’t back down and the questions were spot on.”

Benidorm actor Tony Maudsley also gave his thoughts, saying: “Wow! Emma Willis interview was strong but fair. She left no stone unturned and left Roxanne nowhere to hide. Rather than baying for blood though, she looked like a very very disappointed parent – which is far worse in my opinion. Well done Emma.”

Many others followed suit, taking to social media to lavish praise on Emma for putting Roxanne on the spot and forcing her to face the allegation and its consequences.

Others said their particular favourite part was Emma pulling out her ear piece when Roxanne started to cry, indicating the interview was done. 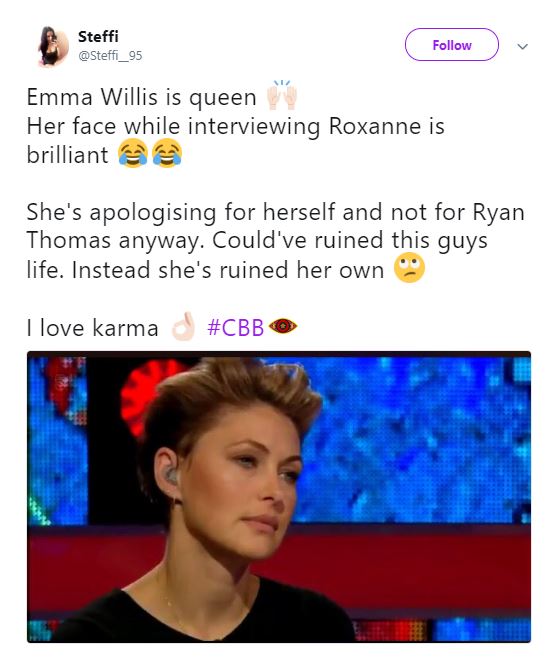 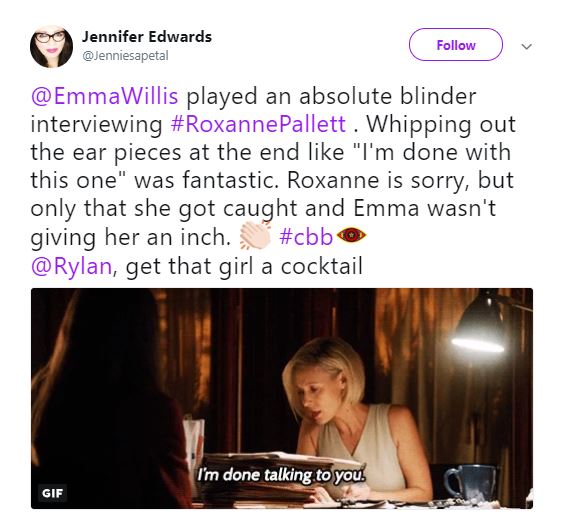 Roxanne told Emma: “I’m the most hated girl in Britain right now. It’s a lot to deal with… it’s the title I feel everyone is giving me at the moment and all I can do is own it, accept it, apologise and try to take each day now bettering all of those things I’m realising.

Roxanne alleged Coronation Street’s Ryan had “deliberately” and “repeatedly” punched her, leaving her in pain.

Ryan, who apologised and said there was no malice or anger intended in his actions, was given a formal warning, leading to outrage among his friends, family and viewers.

Roxanne then chose to quit the show, meaning no eviction interview.

But she returned to Celebrity Big Brother on Monday for a pre-recorded interview with host Emma, who grilled her on why she’d made the allegation against Ryan and whether she felt remorse.

Roxanne said: “Watching it feels like a completely different scenario to how it felt at the time.”

But Emma quizzed her on just how she “could get something so wrong” in her head.

“It’s how I felt when he did it,” said Roxanne. “It hurt. I can’t prove a feeling, no one can, and the more I thought about it, it became heightened. The first thing I did when I got out was watch it back and I immediately realised…”

But Emma asked how her perspective had suddenly shifted, pointing out: “If it hurt, it will always hurt, so why did watching something change it because surely it’s the same incident?”

Roxanne replied: “Because I saw what every person saw and I don’t blame anyone for thinking, ‘why did she first of all make light of it and joke it off and skip off?’ I’m more shocked at myself than anyone out there is. I need to go away and think about why I use humour when something bothers me in my mind.”

When asked why she hadn’t broached the subject with Ryan, Roxanne said: “That’s something I’ve asked myself and questioned too. I think it was because I didn’t think he liked me and the feeling I had afterwards was I almost convinced myself it was done with malice and it wasn’t. I know it wasn’t.”

Emma asked Roxanne if she’d considered the impact such an allegation could have on Ryan’s life if the cameras weren’t there.

She told Roxanne: “Did you ever consider the implications that it would have on him? Can you imagine if those cameras hadn’t been there? You would have ruined somebody.”

“I know,” said Roxanne. “I feel devastated. It cripples me with embarrassment and shame that I could have put somebody in that position, seeing the footage of Ryan in the diary room distressed…”

But Emma said: “You saw him distressed in the house. You have the luxury of time and perspective and research. I lot of people aren’t buying your apology.”

Roxanne insisted her apology was genuine but she understand why viewers at home may think otherwise.

When asked if she had truly believed her own story, Roxanne said: “Yes, I did.”

Roxanne went on to explain she “felt genuinely disturbed by the fact somebody had invaded my personal space”, although Emma pointed out housemates had been play fighting previously around her.

Roxanne said this situation was different because she and Ryan “didn’t have that tactile relationship”, adding: “I almost felt he’d done it on purpose and I was wrong, massively wrong.”

Emma replied: “That’s such an understatement.”

“I know,” said Roxanne. “I wish I had the words to say how gutted I am. Hindsight is a wonderful thing and I got it wrong. The only thing I can do is go away now and figure out why I became that sensitive that I manufactured that different version in my head.

Emma pointed Roxanne had also called Ryan a “liar, manipulative and calculating” to other housemates.

At another stage in the interview, Emma brought up the fact 20 of Roxanne’s Emmerdale co-stars have spoken out against her in recent days, including calling her a “compulsive liar”, saying: “That’s a lot of grudges to be holding.”

Emma also wanted to know if Roxanne thinks she can have a career again. Roxanne replied: “I am scared about the future but I have to think about today.”

Roxanne also said: “I can’t apologise enough for trying to label somebody something they are clearly not. All I can do is apologise and say I got it so wrong.”

She said she hasn’t spoken to Ryan’s family as she “wouldn’t want to impose on them”.

Emma ended the interview by asking if Roxanne could forgive herself, to which Roxanne said: “I’d want to.”

As Roxanne began to cry, Emma ended the interview, removing her earpiece and thanking the crew around them.