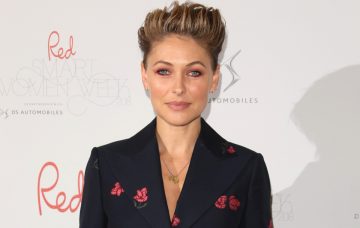 Emma Willis pulls out The Voice launch because of illness!

She exited out of the back door after photos

With the first episode of the series beginning THIS weekend, everyone was on excitable form at the official launch event for The Voice 2019 on Thursday.

But one person not feeling her best was presenter Emma Willis, who reportedly left early, “out the back door” after becoming ill.

Emma, 42, made it as far as the red carpet, where she posed for some pics in a pink suit by designer Racil Chalhoub.

But The Sun reports that the mum-of-three left shortly afterwards, a fact confirmed by coach Olly Murs when he took to the stage.

The singer told the audience: “I’m stepping in for Emma Willis who was meant to be introducing us all. You might have noticed she’s not here. She had to leave because she’s ill, bless her.”

One of my favorite songs and reminders @thevoiceuk #remember the music

All three performed on stage, and shared pictures and videos from the special event in London.

Olly sang with the Black Eyed Peas singer, and later added a group photo, calling it a: “Wicked day with my Voice family!!”

Despite missing their favourite host, fans on Twitter rushed to share their excitement at the series returning, with one commenting: “Can’t wait for the new series, lots of love and luck to u all xx.”

Another referenced the recent cancellation of Emma’s other presenting job, saying: “YAY FOR THE VOICE U.K. AND EMMA ON THE SCREEN…working thru the Big Brother pains? Lol ✨🙌🏽.”

A third tweeted simply: “Looking forward to it. x” while a fourth laughed: “I will be that women laying on the sofa with me cuppa shouting…TURN TURN …HEHE…😍.”

Others complimented Emma, who showed no visible signs of being poorly, telling her: “Oh my goodness you look sensational ⭐️.” Another wrote: “What an absolute power suit!!! We love it!!! 😍❤️.”

One more gushed: “Your suit is EVERYTHING!”

Emma, who is married to singer Matt Willis, didn’t mention her germs on social media, instead sharing a quick video interview with The Voice backstage reporter AJ Odudu, apparently recorded another time.

The Voice UK airs on ITV on Saturday January 5 at 8pm, and we really can’t wait. Let’s hope Em is better by then.

Are you excited for this series of The Voice? Leave us a comment on our Facebook page @EntertainmentDailyFix and let us know what you think.