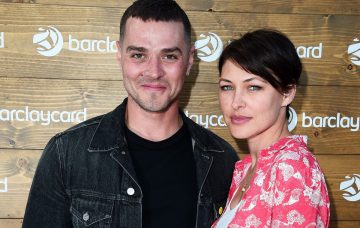 Emma Willis’ husband Matt has admitted he “burned” some of his wedding photos.

The Busted rocker had been to rehab for alcohol and drug addictions twice before he tied the knot with presenter Emma Willis in 2008.

But he didn’t get sober until his third stint of treatment later that year and he admitted he used to cringe looking back at the pictures from their big day.

He told the Daily Mirror: “I was a massive, bloated, wreck-head. A sweaty, chubby, [expletive].

“I looked terrible. I’ve burnt the other ones. I looked like a competition winner stood next to Emma Willis.”

In July, Matt, 35, and Emma – who have children Isabelle, nine, Ace, six, and two-year-old Trixie together – marked their tenth wedding anniversary with a vow renewal ceremony.

During the bash, Emma and their female guests wore their original wedding gowns, and What I Go To School For hitmaker Matt admitted he agreed to the celebration so he finally had some nice photos of himself next to the 42-year-old beauty in her bridal wear.

He added to the Mirror: “I redeemed myself. If I’m honest, that’s why I said yes to the whole idea. I needed a good picture of me and Emma in that wedding dress, because she looks amazing.”

Though the couple loved their vow renewal ceremony, Matt recently admitted he and Emma were also “a bit embarrassed” because they worried their celebration was “a bit cheesy”.

The couple held their vow renewal at the picturesque Rushton Hall in Northamptonshire, where they originally wed in 2008.

And apparently, they even asked Britain’s Got More Talent host Stephen Mulhern to officiate after he agreed to get ordained especially.

A few days earlier, Emma had paid tribute to her husband of 10 years by sharing a funny picture on Instagram.

In the shot, she had placed her perfectly painted toenails in his nostrils and told her followers: “10 glorious years of annoying the [expletive] out of him.

“Thank you @mattjwillis for always being my partner in crime. Love you babe. Happy anniversary.”

Matt, meanwhile, shared a gorgeous picture of himself and Emma on his feed and a gushing message about his wife.

He said: “I actually managed to hang on to her for 10 years… I’m still not sure how?

“I know I’m punching before you all comment that! I am the luckiest guy in the world. I get to spend the rest of my life with this kind beautiful powerful woman.

“She is the most amazing wife and mother and I could not be more proud to be her husband.”

Matt added: “Thank you for the best years of my life… btw, I took 20 of these photos before I got one where she was not blinking because of the flash.”

Were you happy with your wedding photos? Leave us a comment on our Facebook page @EntertainmentDailyFix and let us know what you think!