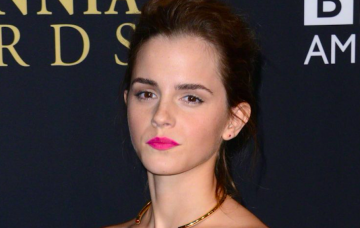 Emma Watson mocked for awkward tattoo error at the Oscars

She has an English degree!

Considering she’s one of the most highly-educated actresses in Hollywood, this is a bit strange.

It was a tribute to “Time’s Up” – Hollywood’s movement against sexual harassment, which Emma passionately supports.

Unfortunately, eagle-eyed fans noticed she’d missed out the apostrophe between the ‘e’ and the ‘s’, so the tattoo read: “Times Up”, instead of: “Time’s Up”.

The internet was a bit baffled, with one commentator writing: “Appalling grammatical knowledge, she has made herself look like a fool.”

Another added: “How embarrassing!”

Others defended Emma, writing: “Women are suppressed and all they can concentrate on is bad grammar, keep up the good work Emma!”

Another said: “Can’t even deal with the fact people could obsess over Emma Watson’s error on her #TimesUp tattoo. What have we become? If we can’t even make a stand without being criticised.”

It’s unclear whether the 27-year-old star, who studied at the prestigious Ivy League Brown University until 2014, had made the inking permanent or if it was temporary.

And whether the apostrophe was deliberate or not, it’s got everyone talking about a worthy cause.

Besides, it’s not like the film star didn’t already know how it’s spelled.

In February, Emma appeared in a “Time’s Up” promotional video, posted to Instagram, where she’s wearing a t-shirt with the slogan emblazoned across her chest.

The actress has been one of the most vocal supporters of the movement.

Last month she donated £1 million to the UK Justice and Equality Fund, set up to help those affected by sexual harassment.

The campaign was created by the nearly 200 British and Irish female stars who signed an open letter calling for an end to sexual harassment in the workplace.

As well as Emma, fellow A-listers Carey Mulligan, Saoirse Ronan, Emma Thompson, Gemma Chan, Keira Knightley were among the many actors to sign the letter, which was published in The Observer.

In February, Emma – who has been on cinema screens since 2001, when she was only 11 – took to Instagram to share a picture of herself with many other Hollywood actresses dressed all in black at the Baftas.

She wrote: “There is no question that #TIMESUP should be and will be a global movement. A movement that is defined and led by those affected by the problem, not by those in power.”

She wrote next to it: “And I’m beaming! Love these ladies 🖤.”

Her 43.4 million Instagram followers have celebrated her determination, commenting on her pictures: “Watching you lovely ladies at the golden globes was amazing! You are all role models for youth looking to make a change!! This movement is unreal, Thank you ladies #TIMESUP #heforshe”.”

Another added: “Omg omg celebrities actually using their influence to do good in the world”.

Which is probably more important than an errant apostrophe, right?

Are you an apostrophe obsessive? Leave us a comment on our Facebook page @EntertainmentDailyFix and let us know what you think!