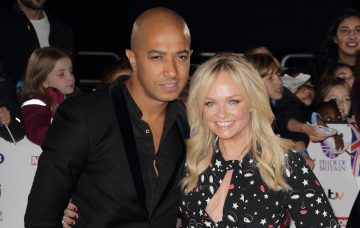 The Spice Girls star and Heart FM DJ shared a sweet snap of little Tate to Instagram on Bank Holiday Sunday, showing him sitting in his mum’s radio studio.

She added the caption: “Our beautiful Tate, happy birthday. You are brilliant in every way, you have taught everyone around you so much, to dream big and be you!

“We love you to infinity and beyond.”

Our beautiful Tate, happy birthday. You are brilliant in every way, you have taught everyone around you so much, to dream big and be you! We love you to infinity and beyond. 🦄🌈🍰🎁🎈🎉💝😘🎀🎁🌈🦄🎈

Plenty of fans joined Emma in wishing the little lad a happy birthday!

Emma and long-term fiancé Jade Jones, who was in the band Damage, are also parents to son Beau, ten.

The couple have been together for nearly 20 years.

Emma has previously said while they’d like to tie the knot eventually, neither are in a hurry to walk down the aisle as life is pretty perfect as it is.

“Jade so wants to have more babies,” said Emma.

“It’s whether we are lucky enough. We’re just seeing how things work out.”

“Tate wrote the sweetest little note to the storks the other day, saying: ‘Please can I have a new baby?’ It’s adorable. He said to me: ‘I’m not sure the storks are real, but I’m going to try!'”

Meanwhile, the Spice Girls have been making headlines again today after Mel B got everyone talking yet again about a possible reunion.

Mel shared an old Rolling Stones magazine cover featuring the Spice Girls to Instagram, with the caption: “Can’t wait to see my girls next week yipppeeee.”

There have been a plethora of rumours about the Spice Girls in recent months, after all five girls – Emma, Geri, Mel B, Melanie Chisholm and Victoria Beckham – met up at Geri’s house in February.

It was initially hoped the band were reforming for a new tour and album, but Victoria later rubbished those claims, saying they had simply wanted to catch up and remind the world about girl power.

Victoria told Grazia: “There is no tour, no more music from the Spice Girls, but it was great getting together with them.

However, that hasn’t stopped fans keeping their fingers crossed for a surprise announcement!

It has been rumoured the group could perform at Prince Harry and Meghan Markle’s wedding reception on May 19, too, after Mel B teased the possibility on US TV.

So, naturally, Mel’s little throwback has fans wondering if the meet-up in London is to rehearse for the wedding…

Sadly, even if it is, we won’t get to see the performance as only the actual royal wedding ceremony is televised, with the reception happening away from the cameras. Boo!

Would you like the Spice Girls to reconsider and tour or release new music? Leave us a comment on our Facebook page @EntertainmentDailyFix and let us know what you think!