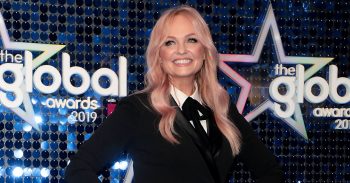 But Strictly saved her

Emma Bunton nearly “broke” when she was told she may not be able to have children.

The 43-year-old singer – who has sons Beau, 11, and seven-year-old Tate with long-term partner Jade Jones – was devastated when doctors broke the news when she was 25 that endometriosis could make it hard to conceive.

She recalled: “That nearly broke me. I knew I had the right partner; I knew I wanted to be a mum. I didn’t give up hope, but it wasn’t happening.”

Five years later, Emma’s doctor watched her competing on Strictly Come Dancing and called to ask the Stop singer if she was pregnant, and the blonde beauty credits the training for the show with helping her overcome her fertility issues.

She told Stella magazine: “She’d seen me on the television holding my hands over my stomach and she just had a feeling I was pregnant.

“I did a test straight away and I was. I have no idea whether it was doing all that exercise but I was so happy. Strictly got me pregnant.”

Emma was just 22 when she first met former Damage singer Jade and she “liked” him immediately.

She said: “He came backstage to see one of our shows. He didn’t say much, but I just saw something in his sweet face that I knew I liked.

She also revealed they had one break up a few years later, but that he called to ask her back and she immediately agreed.

It was recently rumoured that Emma and Jade had given notice of intent to marry, but Emma has rubbished those claims in several interviews.

Speaking at the Global Awards in London last week she insisted there were “no plans” and she told Graham Norton’s Radio 2 show on Saturday the same thing.