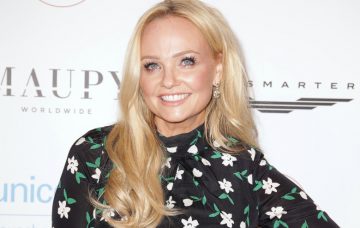 Former Spice Girl is thrilled about her "dream job" on US TV!

Emma Bunton has landed her “dream job” in America.

The former Spice Girls singer will co-host The Great American Baking Show – the US version of The Great British Bake Off – alongside returning presenter Anthony Spice Adams and she’s thrilled to have joined the team alongside judges Paul Hollywood and programme newcomer Sherry Yard.

Emma told Daily Mail: “This is my dream job! Christmas time, eating cake and having such a brilliant time with Spice, Sherry and Paul.”

It is believed Emma – who replaces Ayesha Curry as host – has already filmed the fourth season of the ABC show.

The network opted not to air the remaining episodes of the series, announcing Vallery Lomas had beaten Cindy Mailniak and Molly Brodak to win the show on the day the finale would have broadcast.

Paul joined the show ahead of the third season and replaced his former Great British Bake Off co-judge, Mary Berry.

It’s been a busy few months for the 42-year-old star – who has sons Beau, 11, and seven-year-old Tate with partner Jade Jones – because as well as her show on Heart FM and rumours of a Spice Girls reunion, Emma recently revealed she has been working on some new solo music and having “a little bit of fun” in the recording studio.

She told This Morning: “I am back in the studio, I’m saying this for the first time.

“I have been in the studio and have been having a little bit of fun on my own just to see whether anything comes out of it.”

Meanwhile, Emma is no stranger to appearing on US TV.

Last year, she served as a judge on the ABC talent show, Boy Band, alongside Backstreet Boys’ Nick Carter and Timbaland.

The show, hosted by Rita Ora, saw young male vocalists auditioning to be part of a new five-piece boy band, In Real Life.

What is your dream job? Leave us a comment on our Facebook page @EntertainmentDailyFix and let us know what you think.