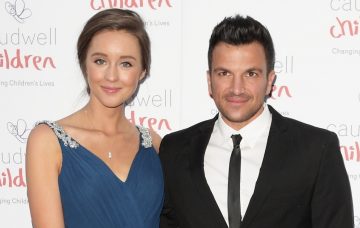 Peter Andre shares cute pic with Emily and their kids

Peter Andre has thrilled fans by sharing a rare glimpse of family life with his youngest children.

The Mysterious Girl singer posted an adorable picture to Instagram on Tuesday evening, showing him and doctor wife Emily cuddled up with their kids.

They share daughter Amelia, four, and son Theo, one.

In the snap, Emily is out of the camera shot, but little Amelia and Theo can be seen, along with their doting dad.

The picture was captioned: “The ultimate pile on. Theo lying on mum, Dad on Theo and Amelia on dad. Watching Shaun the sheep.”

Another said: “Aww, such a close happy family. You got it made, Peter.”

A third added: “Now that’s what you call happy families.”

While Junior and Princess have appeared on TV since their birth, Peter and Emily have chosen not to share photos of their children’s faces online.

Although Peter has admitted he’d love to post endless shots of Amelia and Theo, Emily isn’t as keen, so he’s said he has to respect her wishes and shield the kids’ faces online.

Emily, meanwhile, is also more comfortable staying out of the spotlight.

In his latest column for New magazine, Peter revealed how he’d love to have brought Emily out on stage during a recent Q&A, but knew she wouldn’t enjoy it.

He wrote: “I took Emily and the kids to one of my Evenings With recently. Emily said she was relieved I didn’t ask her up on stage.

“I almost did, but I stopped myself because I didn’t think it would be fair on her. She’d come on stage, but she’d freeze because she’s so shy.”

Despite being shy, Emily has appeared on TV by herself.

She’s served as the resident doctor on ITV’s Lorraine on a couple of occasions, and appeared alongside Pete on his now-ended reality show.

Just recently, she revealed she wouldn’t be against further TV work, although her focus is currently on her doctor job at a hospital.

Writing in her OK! magazine column, Emily said: “Pete has said I’d be a very good TV doctor, which was kind of him.”

She added: “Right now I need to get more experience before I do something like that, but I would consider it.

“It would be completely out of my comfort zone but like I said when I went on Lorraine, you don’t achieve anything without going outside your comfort zone.”