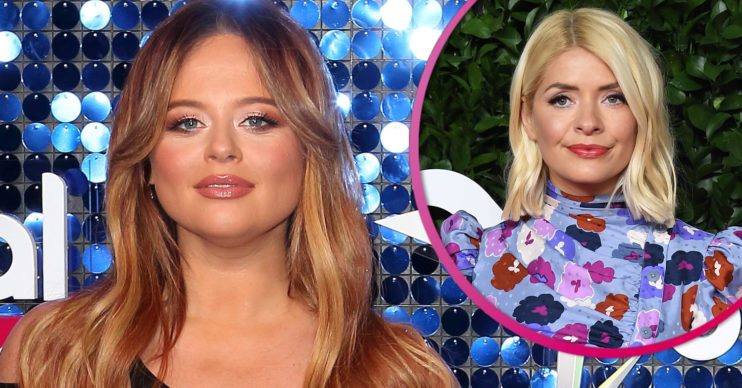 The former Inbetweeners star and I’m A Celebrity runner-up, 30, is apparently stepping into Holly’s shoes when the ITV2 show returns to screens in the autumn.

Who will Emily Atack be replacing?

The Sun reports that Emily – who has already appeared as a guest on the show – is set to replace the This Morning presenter after 12 years as a team captain.

In a summer of upheaval, it was announced that Laura Whitmore would also be joining, replacing Mel B.

The show definitely needed a bit of a shake-up and bosses hope Emily and Laura can do that.

The newspaper quotes a source as saying: “The show definitely needed a bit of a shake-up and bosses hope Emily and Laura can do that.

“It’s one of ITV’s biggest brands and there’s still lots of fun to be had with it.

“Keith can’t wait to ­initiate the new team captains into the show and there are plenty of surprises lined up for viewers.”

Ent Daily has contacted reps for Emily for comment.

The show has seen a lot of change in recent years, with original team captain Fearne Cotton leaving in 2018.

During Fearne’s time on Celebrity Juice, she often took series off and was replaced by Kelly Brook and Gino D’Acampo.

After her exit, she was replaced by Paddy McGuinness.

Paddy, 47, was in the hotseat for one series but then left to pursue other projects.

And that’s when Mel B took over for two series.

How Emily has found love during lockdown

It’s been a busy time for Emily, who also found new love during lockdown.

The star has been pictured on a string of dates with new beau, Joe Caro.

While it’s early days for the couple, the pair are reported to be ‘hitting it off brilliantly’.

Previously, Emily had documented her dating life during lockdown.

She told The Sun: “I had a couple of Zoom dates and realised I need the tactile vibes. I’ve got to have the physical connection.

“I spoke to a couple of pleasant people but Zoom dating ain’t for me.”