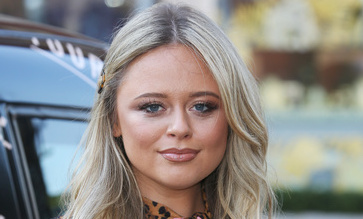 Emily Atack is quickly turning into a national treasure thanks to her down-to-earth appearances on This Morning and Lorraine.

Now the 29-year-old actress has revealed that ‘she’s the heaviest she’s ever been’ but has ‘never been happier’.

The Inbetweeners and I’m A Celebrity star – who’s currently appearing in the series Emily Atack: Adulting on the W channel – opened up about her weight, telling Closer that she’s embracing her curvier figure.

“I’ve never weighed 11st, but I’m doing everything I’ve always wanted to do.

“My life is the best it’s ever been, and I get more compliments now than I ever have before.”

Recently, on The Sara Cox Show, she said that, “we’ve been brought up in a society where a size four and size six girls are how you see all the lead actresses. Most of them are that size.

“I am just a normal size. But in other people’s eyes I’m bigger.”

Emily, who’s loved up with film producer Rob Jowers, recently admitted she worries she won’t be able to have babies.

She decided to undergo a fertility test on TV in her new series.

As she nears 30, she has revealed her concerns about her fertility.

Speaking in a clip from her series, Emily confessed: “I have been worrying about my fertility. My whole life I have assumed if I met someone I could have babies straight away, but what if I can’t?”