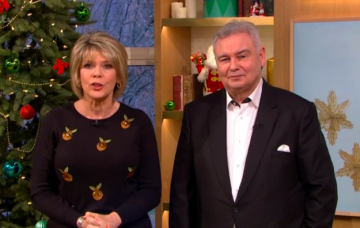 The I'm A Celeb star's impression was hilarious

Towards the end of This Morning, it’s traditional to have a quick chat with Loose Women, to find out what’s coming up.

But presenters Ruth Langsford and Eamonn Holmes were in for a shock during Monday’s show, when they were greeted by I’m A Celebrity… Get Me Out of Here! star Emily Atack mocking them.

“Who’s that?” Ruth said, squinting at the screen, as the split screen showed an unfamiliar face sitting at the head of the ITV panel.

It was the Inbetweeners actress in a wig, dressed up as Ruth – who often appears in the driving seat on Loose Women.

Emily, 28, put on a voice as she pretended to introduce the show as ‘Ruth’, also teasing the pair by joking that she and Eamonn “never argue.”

The real host, Andrea McLean arrived at that point, laughing that she knew Emily couldn’t be the real Ruth when she’d made that comment about her marriage.

Famous for their hilarious bickering, Ruth and Eamonn, 59, giggled at the impression back in the studio.

Ruth, 58, then joked that she feared for her job.

Viewers watching at home were in stitches over the amusing segment.

One person on Twitter wrote: “OMG!!!! That was hysterical!!! Emily Attack is a genius impersonating Ruth Langsford on the preview for today’s @loosewomen #ThisMorning #LooseWomen.”

Another added: “@EmAtack dressed up as Ruth is funny af.” A third laughed: “Oh lovely, she was a delight to watch. Givvus some impressions – do Ruth again!”

The TV star has been enjoying the interview circuit after finishing runner-up to Harry Redknapp on the ITV show.

But it wasn’t all laughs in the jungle, as Emily admitted she suffered a panic attack just days before the series began, after dealing with mental health problems in the past.

Speaking to The Sun on Sunday, Emily said: “There were a lot of down days in the jungle that weren’t aired. We all struggled at times. But we pulled each other through it, plus the show psychiatrist helped. ITV were so protective of us all. I saw the psychiatrist before and after the show, and they’re still checking in to make sure I’m OK.

She added: “I’m naturally a very happy person but I’ve had times with depression, and have got through it with therapy. It’s a chemical imbalance in your brain that sometimes needs to be treated.”

We knew Emily was funny, but we had no idea how funny. Can we get more impressions, please?

What did you think of Emily’s impression? Leave us a comment on our Facebook page @EntertainmentDailyFix and let us know what you think.