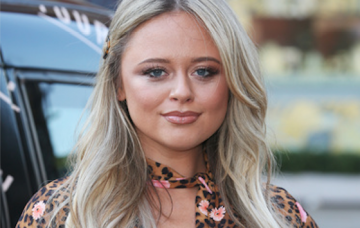 Report claims actor feared wife would find out about past kisses

Emily Atack was binned from The Inbetweeners’ reunion show at the request of co-star James Buckley, a newspaper report has claimed.

The 29-year-old I’m A Celebrity favourite hinted last month the Jay Cartwright actor was responsible for her absence from the Channel 4 New Year’s Day special.

But now The Sun claims Emily was axed from the programme with just 24 hours’ notice after James, 31, told TV bosses: “It’s her or me.”

The news outlet reports the ultimatum was made because he feared his wife would find out about a ‘brief fling’ between the comedy stars that occurred before he was married.

Read more: Gemma Collins confirms she WILL return to Dancing On Ice for series finale

The Sun quotes an unnamed source saying producers were “deeply embarrassed and apologetic” about the decision.

It is claimed both Emily and James were single when they “had a couple of cheeky snogs back in the day” during the early stages of the coming-of-age sitcom’s three series run.

The insider is reported as adding: “The kissing meant nothing to Emily and has never been an issue for her. She was very taken aback to be told she wasn’t needed, and genuinely gutted.”

Dad-of-two James is also said to have had “reservations” over the Charlotte Hinchcliffe actress’ time in jungle reality series I’m A Celebrity in the report.

“Why is James Buckley just so weird to watch. He really doesn’t want to be there as you can tell from his body language,” said one observer on Twitter.

“I’m always very awkward and shy going on TV and chatting about myself,” he tweeted.

ED! has approached representatives for Emily and James for comment.

Some awkward viewing watching @James_Buckley on @SundayBrunchC4 Not the most presentable fella in the world…. 😴😴😴