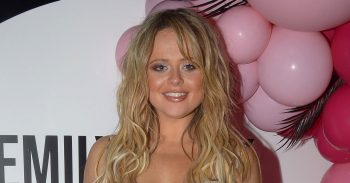 It wasn't even Emily in the photo!

Emily Atack rose to fame as Charlotte on Inbetweeners, but it wasn’t until her stint on I’m a Celebrity… Get Me Out of Here! last year that she won the hearts of the nation.

Shortly after making it to the final, when she was beaten to the jungle crown by football manager Harry Redknapp, Emily started dating her current boyfriend Rob Jowers.

And yesterday, fans were sure Emily and Rob had cemented plans to tie the knot.

The actress shared an engagement snap on Instagram and fans rushed to the comments to offer warm congratulatory messages.

But it appears they hadn’t properly checked the post’s caption, or even the photo itself – which actually showed Emily’s sister, 27-year-old Martha, smiling next to her fiancé.

Emily, who no doubt thought the pic’s intention was perfectly clear, captioned it, “Better get ready for one hell of a badly organised (but pure jokes) hen do!” along with the hashtags #MarfyGotEngaged #TryingNotToHaveABreakDown #WhatHappensToMeNow?

Many of Emily’s followers were quick to correct those who’d mistakenly thought the actress was the one getting hitched.

“It’s her sister,” laughed one. Another added: “I waited to see how many people congratulated her……last three hours have been so funny reading people’s comments!”

Over the weekend, Emily found herself having to deny rumours she and Rob were engaged and urge fans not to scare her new man away.

The stories sprang up after she shared a selfie that seemed to show her sporting an engagement ring, but Emily later clarified the situation on her Instagram stories.

The ring looked like it was on her left hand, but the image had been flipped by the forward-facing camera on Emily’s phone, meaning the ring was actually on her right hand.

She confirmed to her fans: “I’m not engaged. The picture had flipped around, like it does.

“I have a ring here on my right hand, which is the other side.”

It follows Emily’s time on This Morning as a stand-in for Phillip Schofield and Holly Willoughby, who were away for a well-deserved Easter break.

She featured on the show alongside jungle pal John Barrowman, who also presented with The Saturdays singer Rochelle Humes.

Do you think we’re likely to see Emily get engaged any time soon? Leave us a comment on our Facebook page @EntertainmentDailyFix and let us know.