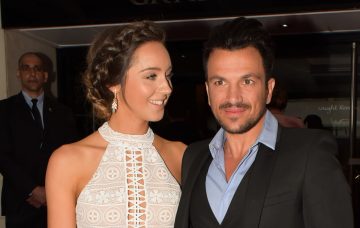 Emily Andre has admitted making a slight blunder when it came to husband Peter’s anniversary gift!

The couple celebrate their third wedding anniversary next week, so naturally, prepared Emily has already chosen and bought a thoughtful gift for her other half.

But unfortunately, the surprise was somewhat spoiled after she ordered Peter’s gift online and accidentally put his name on it.

Emily explained in her OK! magazine column that the gift arrived at the house addressed for Peter and even though she had warned him not to open any parcels in his name, he went ahead and did it anyway!

She wrote: “I told him there was a present in the post, so if a parcel arrived, not to open it. What did he do? He opened it!”

“It’s a leather photo frame as leather is the traditional gift for three years of marriage,” continued Emily. “Thankfully I have some other bits to go with it, so some of it will be a surprise.”

The couple married at Mamhead House outside Exeter on Saturday, July 11, 2015.

Peter and Emily also have son Theo, one, while Peter is dad to son Junior, 13, and daughter Princess, ten, from his marriage to ex-wife Katie Price.

The couple were friends for two years before romance blossomed, after initially meeting through Emily’s consultant surgeon father, who had treated Peter.

Meanwhile, Peter has kept tight-lipped on what he has planned for their anniversary!

How did you celebrate your last anniversary? Leave us a comment on our Facebook page @EntertainmentDailyFix and let us know what you think!