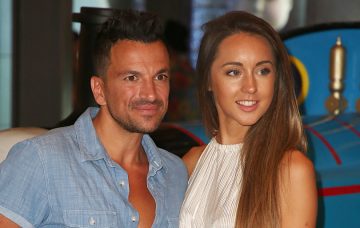 What a beautiful moment!

Peter Andre’s wife Emily was seen sharing a sweet moment with step-daughter Princess on the red carpet at a movie premiere.

The family were on hand to support Peter at a screening for his new children’s movie, Thomas and Friends: Big World! Big Adventures! The Movie on Saturday.

Doctor Emily, 28, was snapped alongside Peter, 45, and his children Junior, 13, and, Princess, ten, from his marriage to ex-wife Katie Price.

Cameras caught Emily and Princess sharing a very sweet moment on the red carpet, as Emily wrapped a protective arm around Princess, while the little girl gazed up at her, her own arm wrapped around Emily.

Peter and Junior were seen smiling at the pair, who looked to be sharing a giggle.

Emily became a step-mum to Junior and Princess when she married Peter on July 11, 2015.

They have two children of their own, Amelia, four, and Theo, one.

Emily has spoken out in the past about her step-mum role, writing in her OK! magazine column: “I think getting the balance right as a step-parent is crucial. For me, I tend to leave the disciplining up to Pete and often feel like a big sister, which works really well for us.”

She added: “Coming into their lives taught me a bit about how to be a mum because they’re so wonderful. I’ve always said to Pete, ‘If you can help me to parent Millie and Theo so they turn out like Junior and Princess then I’ll be very happy.'”

Emily previously told ITV’s Lorraine that Junior and Princess are the “loveliest” children.

She said last year: “I love [being a step-mum] and this may sound quite clichéd, but being with them taught me what I needed to do before I had my own.”

Meanwhile, the couple have yet to reveal how they will celebrate their third wedding anniversary.

Peter, however, no doubt has something romantic planned, as he previously told Hello! magazine: “I’m going to take her somewhere special. I like doing little spontaneous things and I almost don’t want her to read about it.”

They had become engaged in 2013, after Peter popped the question in their daughter Amelia’s nursery just one week before the little girl was born.

The couple were friends for two years before romance blossomed, after initially meeting through Emily’s consultant surgeon father, who had treated Peter.

How did you celebrate your last big anniversary? Leave us a comment on our Facebook page @EntertainmentDailyFix and let us know!