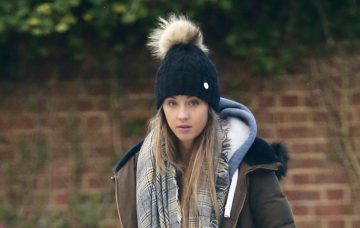 Emily Andre defends Russell Brand over his comments about parenting

Mum Emily has given her thoughts

Russell, who has young daughters Mabel, two, and seven-month-old Peggy, received an influx of backlash after he said he leaves the difficult work to his wife Laura Gallacher.

Emily, who is a doctor, praised Russell for coming clean about his weaknesses. However, she also insisted the 43-year-old needs to “bite the bullet” and get stuck in as a dad.

The 28-year-old said in her OK! column: “Some people have criticised him for leaving his wife to do everything, but I actually think it’s good that he’s come out and admitted his weaknesses.

“I think he just needs to bite the bullet and get on with it because it’s not that hard!”

Russell previously confessed that his partner Laura doesn’t trust him to be left with their daughters for more than 24 hours. He also reckons he is “not so good” with the practical things like feeding and changing nappies.

He told the The Sunday Times: “She wouldn’t go away for 24 hours, Laura. She respects and cares for their safety too much.”

He also said: “Yes, I’m very, very focused on the mystical connotations of Mabel’s beauty and grace. Not so good on the nappies and making sure that they eat food.”

Emily, who has four-year-old Amelia and two-year-old Theo with 45-year-old Pete, said she feels lucky that her hubby was so hands-on with their children.

Emily added: “I was very lucky that Pete was so hands-on and he was very good with nappies.”