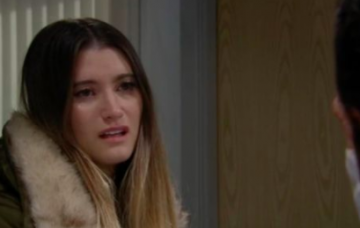 Debbie Dingle is in trouble in Emmerdale next week when she inadvertently gets herself mixed up in Ross Barton’s shady new world.

Ross is still trying to hunt down Simon McManus, still wanting to get revenge on the acid flinging drug dealer for throwing a corrosive substance in his face and scarring him for life.

Debbie, who wants to tell Ross the truth about her and Joe Tate, follows him as he seeks out Simon’s equally dodgy friend Connor.

When Ross finds Connor, he smashes his fist into his face but it’s not long before Ross is drawn into Connor’s drug dealing world.

The next day Dawn hands Ross the drugs but it’s clear she doesn’t want Ross working for Connor.

Then Debbie spots Ross and prepares herself to tell him about her and Joe, but she’s shocked to discover Ross is still looking for Simon.

Obviously it would suit her for him to stop looking for Simon because he’s getting ever closer to finding out that it was her who ordered the attack in the first place.

But while he’s talking to Debbie, Ross is horrified to realise that his car – with the drugs inside – has been stolen.

When Connor finds out what’s happened he violently grabs Debbie, and tells her that she either finds the drugs, or she pays.

Will she find the car or will she have to turn to Joe for help?

Should Debbie just ‘fess up and tell Ross the truth? Let us know by commenting on our Facebook page @EntertainmentDailyFix!