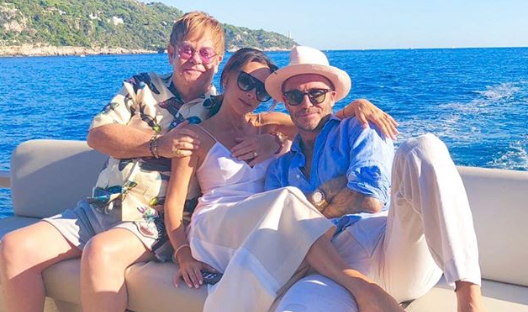 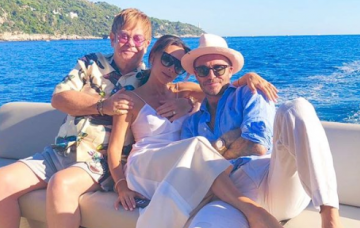 Romeo will be marking the milestone in a few days

Romeo, who turns 16 on September 1, was treated to an early birthday meal with Elton, his husband David Furnish and the Beckham family during a getaway in the South of France.

Romeo’s mum Victoria took to Instagram on Wednesday to share a clip of the teenager being surprised with a giant cake complete with a sparkler as they dined out at a restaurant.

In the clip, Romeo couldn’t stop smiling as he was presented with a chocolate cake, which was decorated with the words ‘Happy Birthday Romeo’.

Elton, Romeo’s dad David and his siblings Brooklyn, 19, and Harper, seven, were all seen singing happy birthday to the youngster.

The fashion designer also took to her Instagram story to share a clip of a band performing for their table at the restaurant.

The clip sees the Beckham kids, Brooklyn, Romeo, Cruz, 13, and Harper, around the table watching the band perform.

The Beckhams are enjoying a vacay in the sun with Elton, David and their sons Zachary, seven, and five-year-old Elijah.

David, 43, took to Instagram to post a snap of himself and the legendary singer lounging on a boat in France.

Uncle Elton…. We have known each other now for 25 years .. Fun times with each other 😍 @eltonjohn @davidfurnish

A couple of hours earlier, Elton shared a picture with his followers showing himself, David and Victoria on the boat.

Elton is seen with his arms wrapped around fashion designer Victoria as she rested her leg on her hubby.

Elton wrote: “Winding down my summer holiday with these lovely people.”

The Beckhams and Sir Elton have been close for more than two decades and the Yellow Brick Road singer was due to perform at the couple’s wedding in 1999 before suffering a heart attack that prevented him from playing.

He later sang at one of the Beckham children’s christenings.

How did you celebrate your most recent birthday? Leave us a comment on our Facebook page @EntertainmentDailyFix and let us know what you think!