Not sure we'd be sharing it with everyone that's for sure!

There’s nothing worse than jumping on a set of scales, only to realise that you have actually put on weight.

Well nothing worse unless you do it on telly!

Something that Gogglebox star Ellie Warner revealed to the nation in last night’s show.

Ellie, who stars in the Channel 4 programme with her sister Izzi, decided to weigh herself.

As she went to the bathroom, Izzi shouted after her: “They are heavier them scales,” as a loud gasp could be heard coming from Ellie, obviously discovering the news she really didn’t want.

Read more: Why did Ruth Langsford tick off Ant and Dec?

Izzi, who sat twiddling her hair on one of the girls’ sofas, while her sister was torturing herself in the bathroom said: “Worse than you thought?”

A clearly shocked Ellie asked: “Those scales do weigh heavier, don’t they? How much do you reckon?”

Izzi said: “Yeah, I reckon you can definitely take 2lb off,”

Bless her for trying to be helpful to a sister in need.

Ellie said: “13 stone 6 – and three quarters of a lb,” a shocked Ellie revealed.

Izzi said: “So like 13 stone you can definitely say.”

The pair both burst into laughter as Izzi did what all good sisters should and said: “You have not put on four stone!”

As she reached for her mobile phone, Ellie said: “I have… I’ve got to put that on Snapchat.”

Well, you’ve already announced it to the nation, so why not all your mates as well?

The Leeds girls returned to our screens last night as the award winning show started its 11th series.

One thing that was definitely missing, was the unforgettable Leon Bernicoff and his wife June.

Leon sadly died just before Christmas last year, and many fans wondered if June would return to the show.

But after losing her love of over 60 years, June decided that she would no longer take part, and it seems fans were really missing then both on last night’s show.

Twitter was flooded with tributes to the 83 year old… 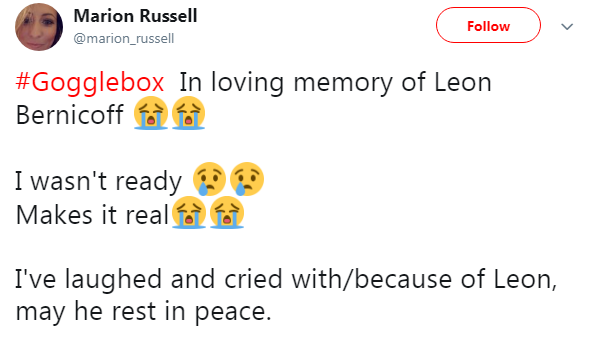 But never one to let their fans down, June added her own tweet,

What did you think of the new series of Gogglebox?