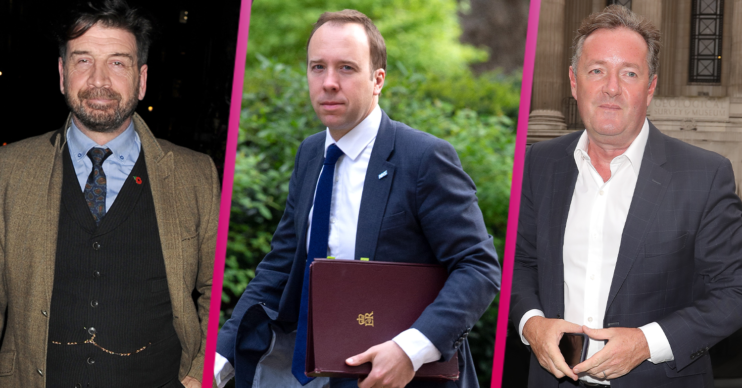 ED’s Top 10 weird celebrity crushes: you can’t help who you fall for!

Are any of these on YOUR celebrity crushes list?

Every single person has at least one or two weird celebrity crushes.

It’s one of those things you can’t really explain and someone not many people would openly admit to thinking is hot (but probably all do!).

Dr Hilary Jones, Matt Hancock, Piers Morgan and Eamonn Holmes are just a few famous faces that are on our list.

Read more: Rishi Sunak slammed as he announces ‘eat out to help out’ half-price meal scheme

You either love him or hate him, but many people have admitted having a crush on him.

Do you have a crush on Piers?

He was even declared Heat magazine’s Crush of the Year twice after beating the likes of Prince Harry and Ant and Dec.

Come on, that must say something!

It must be his fiery rants on GMB that leave people hot under the collar.

Money saving expert Martin Lewis is next on the list.

As well as being a regular on This Morning, the star has his own show called The Martin Lewis Money Show.

His incredible knowledge and helpful tips make him such a sexy proposition.

Now Dr Hilary is just an all-round heartthrob in our eyes.

The GP, 67, has been praised for his guidance and knowledge throughout the coronavirus pandemic.

Dr Hilary has been appearing regularly on Good Morning Britain to give his advice on the virus.

Whether it’s his dashing looks or medical knowledge, we have no doubt that Dr Hilary is on a lot of people’s list of crushes.

Actor Jake Wood – aka Max Branning – is another star who people have confessed to fancying.

In 2017, the EastEnders bad boy topped a poll of the nation’s weirdest crushes for the third time.

He beat the likes of Alan Carr, Ricky Gervais and Eamonn Holmes to the top of the Heat magazine list.

The actor may be a bad boy in Walford, but many people have a soft spot for the star.

Matt, 41, has been helping guide the UK through the coronavirus crisis.

And it seems people have developed a bit of a thing for him (including us!).

Now, you can’t deny that Bradley Walsh is just a national treasure.

His witty sense of humour and incredible talent have made him a TV favourite for many.

The Chase favourite is just an all-round entertainer and it seems there’s nothing he can’t do.

That phrase ‘laugh you into bed’ was made for him!

TV favourite Matt Baker became loved by many for his work on The One Show.

After he left earlier this year, the presenter definitely left a hole in our hearts.

But he will always remain on our crush list.

It must be his Irish charm or witty humour that makes Eamonn Holmes one of our crushes.

The presenter has made Heat magazine’s annual Weird Crush list a few times.

Even Love Island star Laura Anderson admitted to having a crush on him!

Presenter Nick Knowles has also made it onto our list.

The DIY SOS star sent fans wild when he stripped down to a pair of speedos in the I’m A Celebrity jungle last year.

He also had his Myleene Klass moment under the waterfall shower.

Let’s just say, we couldn’t take our eyes away from the screen.

The final name on our weird crush list is Simon Cowell.

Over the years, Simon has begun showing his softer side and it seems to have left many people getting the hots for him.

Even his Britain’s Got Talent co-star David Walliams admitted to have a “man crush” on him.

Who is your ultimate celebrity crush? Do you have a weird one? Visit our Facebook page @EntertainmentDailyFix and let us know.