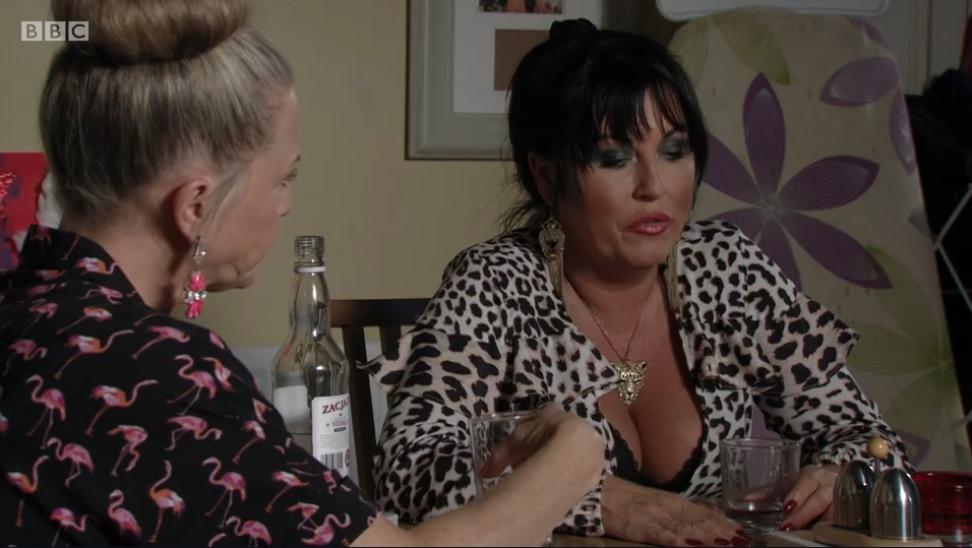 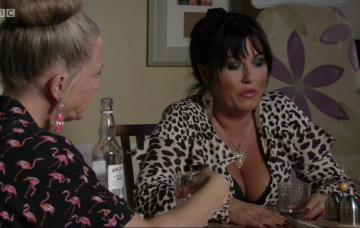 EastEnders viewers wish Kat Slater would cover up her cleavage

Seems like she always falling out of her top

EastEnders viewers have had just about enough of Kat Slater’s cleavage.

Distracted soap fans complained during Monday’s episode they were “sick” of seeing the character’s cleavage being displayed so prominently, ranking her chest as one of most annoying features of Albert Square.

It was also noted how the Walford barmaid seemed to spill out in every scene she figured in.

Wearing a low-cut leopardskin ensemble with barely a button done up, Kat was dressed to the nines and looking like she was ready for a big night up west as the rest of the extended Slater family prepared breakfast.

She was also seen falling out of her top as she FaceTimed Alfie Moon from the sofa as she pleaded to see her children.

Those watching at home also got an eyeful as Kat hit the bottle upstairs in The Vic before she was joined for a heart to heart with Linda Carter.

But while Walford fans begged TV bosses to cover Kat’s chest up, it seems they were also split over what offended their sight the most in the BBC One soap.

“I don’t know what annoys me more,” began one.

“Linda the [bleep], Stuart the nutter or Kat always flashing her cleavage.”

Another fan echoed a similar thought, tweeting: “Linda’s pink tracksuit and Kat’s orange cleavage have me on the ropes. Just need Hayley now to finish me.”

A frustrated third viewer stated, simply: “I wish Kat Slater would put her boobs away, I’m sick of seeing them.”

They were not the only ones unable to escape noticing the soap character’s chest.

@bbceastenders love kat !but do we have to see so much of her boobs on display !🙄

Someone want to help kat get her boobs back in her top, cheers #EastEnders

Kats boobs are the stuff of nightmare. #EastEnders

I wish Jean would chuck that tea towel over Kats boobs, putting me off my pudding🙀#eastenders

I’ve had quite enough of Kat’s cleavage tbqhwy #Eastenders pic.twitter.com/pQ4f0EP6vQ

Cover them up Kat! Or at least wear a scarf in the winter, you’ll catch a chill.