We were confused there for a while!

We’ve been counting down the days until it finally happened, and it took place last night.

She wrote on the social media site: “Goodbye to the Branning sisters. I will miss you Lauren Branning. Always.”

Among the floods of messages from fans and well-wishes, Jacqueline’s parents also tweeted support.

“We love you so much onwards and upwards love mum dad and family”.

Another fan commented on Jacqueline’s post: “Well done on playing the character so wonderfully. You’ll always be the Lauren Branning to me in the 7.5 years I’ve been a loyal viewer”.

Another wrote: “Aww so sad to see you both leave, good luck for the future x”. 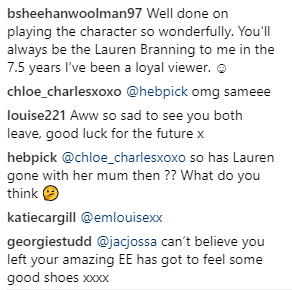 However long we’ve been waiting for Lauren’s exit, when it came, fans found it somewhat confusing.

They were left perplexed as Lauren said a tearful goodbye to her sister Abi as she was laid to rest, before walking off and seemingly deciding to end her relationship with boyfriend Josh, without telling him.

As she left the funeral, Lauren walked to a waiting Josh and baby Louie, before things took a silent twist.

Instead of getting into the car packed with all their belongings for their move to Glasgow, she took Louie by the hand and walked off – silently.

Josh didn’t even seem to react to Lauren wandering off into the cemetery and viewers were utterly confounded by the scene.

Her exit does appear to leave a door open for an Albert Square return – unlike poor Abi, who died after falling from the roof of the Queen Vic on Christmas Day.

But it seems that whatever happens in the future, Jacqueline will always remember her time on the soap – and so will her fans.

Did Lauren get the exit she deserved? Leave us a comment on our Facebook page @EntertainmentDailyFix and let us know what you think!