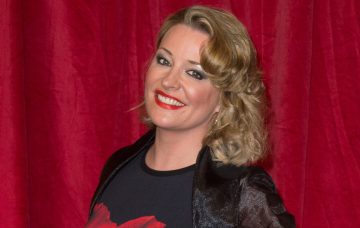 Jane Beale actress is believed to have married over the weekend

It is believed the happy couple enjoyed a low-key celebration in London on Saturday, with some of Laurie’s Albert Square co-stars on hand to toast her nuptials.

Tamzin Outhwaite was among the famous faces in attendance, with the Mel Owen star revealing details about the do to her 200,000 Instagram followers.

Uploading a snap of a host of “gorgeous wedding flowers” to her Instagram Stories, Tamzin later let slip who they were for when she posted an image of the 49-year-old Jane Beale favourite giving her man a kiss.

Her hair was curled and held back with flowers that matched those her new husband wore in his buttonhole.

Tamzin’s social media account of the day jumped forward a few hours with her next update, which gave an insight into her morning after the night before. Apparently Tam enjoyed a salmon and avocado bagel for her breakfast yesterday.

Letitia Dean – who plays Walford’s Sharon Mitchell – is also thought to have been a guest at the wedding reception.

A rep confirmed to ED!: “Laurie and Dan married on Saturday in a small private ceremony with close family and friends.”

Laurie, however, has not yet confirmed her new marital status on social media herself – but her most recent tweet seemed to hint she had a big few days planned.

She tweeted on Thursday last week: “Roll on the weekend… have it large.”

Roll on the weekend… have it large.. xx

She made her debut on EastEnders as long-suffering Jane in 2004 before taking a break from the soap in 2012.

Returning in 2014, Laurie stayed on for another three years before her second exit in 2017.