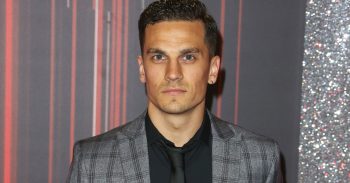 He shared a romantic photo of the moment

Aaron announced his engagement on Instagram and Twitter, posting a sweet photo of him and Tricia, with the caption: “Here’s to the future Mrs Sidwell #SheSaidYes.”

The shot shows a sign for London’s Carnaby Street in the background in a touching tribute to the pair’s early relationship, as they met on the set of Carnaby Street: The Musical.

The actor’s EastEnders cast-mates rushed to congratulate him on his news.

Tilly Keeper commented: “Congratulations,” on Aaron’s Instagram, and reiterated it on Twitter, saying: “So so happy for the two of you.”

Aaron paid tribute to Tricia as he celebrated his 30th birthday last year, calling her the “greatest partner in the world”.

He posted a backstage shot as he was on tour in Wicked, expressing his pride at being smoke-free and sober.

“Well, I made it to 30!” he said. “Fitter, happier and healthier than I’ve ever been. I have been smoke free and sober for a year.

“I have a clean, positive (sometimes) approach to life, an understanding of myself and how I tick and, most importantly, I have 2 beautiful children and the greatest partner in the world to share it all with!

“Thank you for the birthday love. Still playing dress up and make believe though. Long may it last! So long the mayhem of my 20’s and hello to the peace and serenity of my 30’s. Much love.”

Aaron has two children from his previous marriage to Grace Isted. The pair divorced in 2017.

What do you think of Aaron’s news? Leave us a comment on our Facebook page @EntertainmentDailyFix and let us know.