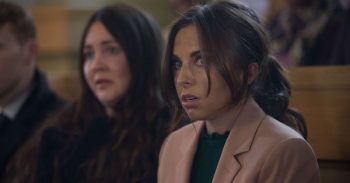 Ruby Allen continues to face her rapists in court tonight, as she prepares to hear Matt’s testimony.

The Walford resident has bravely chosen to face her attackers Matt and Ross head on – despite the horrifying flashbacks of the evening in question that this provokes.

As Ruby braces herself to hear a string of denials and accusations about her being a “slag”, she’s left stunned when an unexpected turn of events looks set to change the tide in her favour…

Could Ross and Matt be found guilty after all?

Unsurprisingly, Ross remains unapologetic, sticking by his version of events and insisting he had consent.

However, while Ross remains remorseless, Matt appears to be wavering…

With Jay there to support her, as well as Stacey and Martin, Ruby watches on as Matt clearly feels the pressure during his cross-examination.

In a shocking twist, the guilt appears to get the better of him and he buckles on the stand… But will he tell the whole truth, and nothing but the truth and confess all?

And, if so, will it be enough to convince the jury that Ruby was, indeed, raped?

Viewers will have to wait until the end of the week to discover the jury’s verdict but, with the decision being made sooner than expected, is it good news or bad news for Ruby?

Amidst Ruby’s court case, she still finds time to worry about Stacey’s emotional wellbeing after she took the stand to defend her.

In emotional scenes between the good friends, Ruby takes Stacey to Archie Mitchell’s grave to encourage Stacey to say everything she had ever wanted to get out of her system and put her demons to rest.

Viewers know Stacey was raped by villain Archie in 2009, something which she never got legal closure for. But she did kill him…

Do you think Ruby will get justice? Leave us a comment on our Facebook page @EntertainmentDailyFix and let us know what you think!