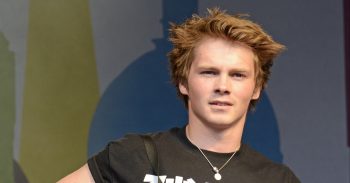 Former EastEnders star Sam Strike has landed what could turn out to be the biggest role in his career to date.

The Essex-born actor, 25, has reportedly been chosen as the lead in an upcoming adaptation of Stephen King’s Dark Tower books.

Sam played Johnny Carter in EastEnders for a year, before leaving Walford in 2014 and going on to act in shows including Silent Witness and sci-fi mini-series Nightflyers.

According to a report in Entertainment Weekly, he’s now set to play gunslinger protagonist Roland Deschain in a new series of Dark Tower, which is reportedly due to start filming next month.

It was a part previously played by Idris Elba, who starred alongside with Matthew McConaughey in a 2017 film adaptation that was slammed by critics and garnered a 16 per cent rating on Rotten Tomatoes.

Producer Glen Mazzara, who previously worked on zombie epic The Walking Dead, has been helping creators at Amazon Prime Video turn the eight-book saga into a live-action series.

As with the books, the show is expected to follow Roland Deschain on his quest to the mystical tower.

The series might be a step up for Sam, but it’s by no means his first taste of Hollywood.

In 2017, he starred in Netflix crime drama Mindhunter, created by playwright and screenwriter Joe Penhall.

After his departure in 2014, show bosses said there were no plans to recruit another actor for the role, but in 2016 they brought in Ted Reilly as his replacement.

Speaking at the time to Digital Spy, Sam said the decision to recast had to be done if they wanted Johnny back as he “wasn’t ready to return any time in the near future”.

He continued: “I didn’t write the character, but I do feel a sense of ownership over him, like an overbearing parent.

“I lived with him six days a week over the course of a year, fighting often for what I felt was a correct portrayal, and I’m sure Dom [former EastEnders boss Dominic Treadwell-Collins] will make sure the next actor to portray him will do the character justice.”

But at the end of 2017, it was confirmed that Ted was also leaving Albert Square.

Are you looking forward to seeing Sam in Dark Tower? Leave us a comment on our Facebook page @EntertainmentDailyFix and let us know what you think!