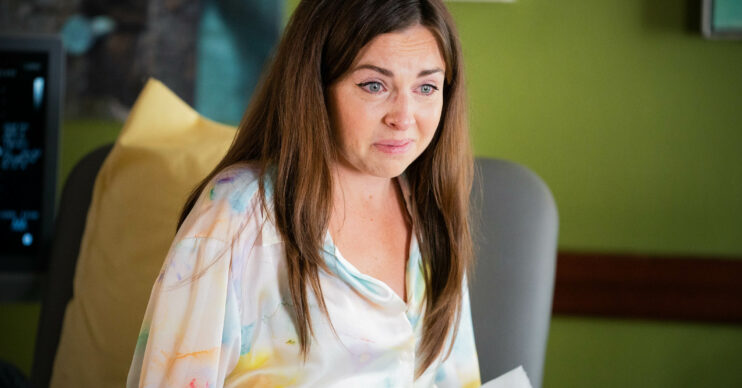 Louisa Lytton will be exiting the soap soon

Poor little rich girl Ruby Allen is set to get an almighty comeuppance in EastEnders.

Actress Louisa Lytton must have known the writing was on the wall for her character as soon as she messed with Walford queens Stacey and Jean Slater.

Plagued with guilt, Ruby recently confessed to Jean that she had lied and allowed an innocent woman to go to prison.

If she was hoping soft-hearted Jean would forgive her, Ruby was very much mistaken.

Jean has threatened to tell Martin everything.

Now EastEnders’ senior exec producer Kate Oates has revealed what’s to come: “Jean is intent on bringing Ruby down and on clearing Stacey’s name and so Ruby is going to come to a slightly sticky end!” she told Metro.co.uk.

“It’s fun to see how that plays out!”

This will tie in nicely with Louisa heading off on maternity leave soon to welcome her first child.

And as one actress departs… another returns.

Lacey Turner will be returning to Albert Square soon – with a new friend in tow.

Producer Jon Sen revealed: “That’s going to be huge. She returns from prison. As you know, she went to prison after a false accusation from Ruby.

“And she’s returning with somebody she’s met inside. A new character called Eve, played by Heather Peace, and we’re really excited about her!

“What that kind of friendship is that going to be? Because they come back having shared a prison experience that has united them in a very unique friendship, so that’s really exciting.”

Read more: EastEnders SPOILERS: Gray to kill boss Laura as she fires him?

Heather has said of her character: “I’m absolutely thrilled to be joining the cast of Eastenders and I love my character Eve.

“She’s tough, but fair; super bright and cheeky. I’m loving working with such a brilliant cast, in particular Lacey Turner.

“We immediately got on and sparked off each other which makes going to work easy & fun.”

Are you looking forward to Stacey being back? Head to our Facebook page @EntertainmentDailyFix and tell us what you think of our story.